Olathe North 42, SM East 14
Olathe North took home a 28 point victory Friday night using their quarterback rotation of David Blazevic and Victor Simmons to perfection. Blazevic hit Jason Peete on a 60 yard touchdown strike before Simmons scored on a 26 yard option keeper with 2:40 remaining in the first quarter. The Eagles slowed in the second quarter, and SM East closed the margin to seven points before the half when John Schrock hit an outstretched Kevin Hertel with a 26 yard touchdown pass. The second half, however, was all Olathe North. Three touchdown runs and a 49 yard touchdown pass from Blazevic to Adonis Saunders (below) put the Eagles up comfortably in the victory. 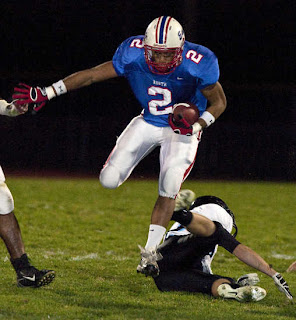 Blue Valley Northwest 38, Olathe Northwest 25
Blue Valley Northwest quarterback Koby Chadick came out determined to get his Huskies to the next round of the playoffs--207 rushing yards and five touchdowns later his team came out on top. Olathe Northwest, who was making their second playoff appearance in school history, stayed competitive throughout the game on several big touchdowns from Devon Boyce but it wasn't enough. Chadick threw a touchdown pass to Matt Ornduff in the first quarter, and went on to add at least one touchdown run in each of the last three quarters. Blue Valley Northwest will face rival Blue Valley next week in a rematch of a Sectional round thriller from 2008.
Blue Valley 42, SM West 18
For the second year in a row SM West faced an upstart Blue Valley school district team in the first round of the playoffs, and came up short. Blue Valley was led by senior quarterback Anthony Abenoja (below) who scored a combined six touchdowns--three rushing and three passing. The 42 points were the most a SM West defense has given up since losing 42-0 to Olathe North on September 17, 2004. In his last game as the SM West quarterback DJ Balazs completed 10 of 23 passes for 166 yards and three touchdowns. 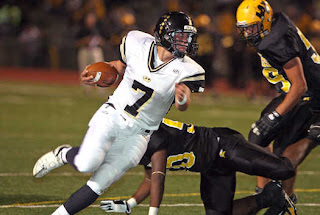 Lawrence Free State 38, Olathe East 7
In a strong defensive effort, Lawrence Free State held Olathe East to a mere 132 yards of total offense, allowing the lone touchdown on a 73 yard pass from Carter McEntee to Chris Fields. In total five different Firebirds scored touchdowns in addition to a field goal by Gabe Ballard-Hanson. With the victory Free State avenged a week one loss to the Hawks. The Firebirds other blemish came against Olathe North, a team they will be facing Friday.
Posted by Eli Underwood at 8:25 PM