Lawrence Free State (8-2) at Olathe North (10-0)
Where: ODAC
Time: 7 pm
CJ-Online Computer Point Spread: Olathe North by 12
Who to watch for: This game may feature the best possible matchup in terms of talent in the Sunflower League for 2009. Olathe North's James Franklin leads class 6A with 2,074 yards rushing in addition to 27 rushing touchdowns. If Free State has any chance at winning, it will start with slowing down Franklin's production (a task no team has successfully completed this season). For Free State everything comes down to what quarterback Camren Torneden (below) is able to manifest. In the previous matchup of the two teams Torneden was held to 97 yards passing and 20 yards rushing--way below his season averages. The success of both teams will be heavily reliant on those two, but a wealth of talent exists at other positions for the two squads.
What to watch for: Quite honestly the biggest question is whether or not Free State can do anything to slow down Olathe North's run game. The speed of Olathe North is unparalleled and no team has been able to get around that all season. In the case of Free State, their best defense may be a great offense. If the Firebirds can hang around with Olathe North's scoring output they can stay in the game and potentially pull an upset. But, that will require several defensive stops and a big game offensively from Torneden and Kirk Resseguie. 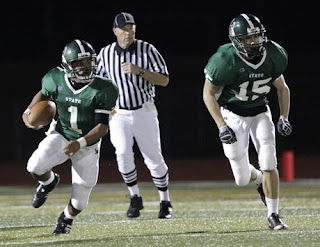 Blue Valley Northwest (9-1) at Blue Valley (4-6)
Where: Blue Valley High School
Time: 7 pm
CJ-Online Computer Point Spread: Blue Valley Northwest by 7.5
Who to Watch For: Both teams are offensive juggernauts and inevitably the ball is going to be thrown around quite a bit on Friday night. The signal callers making those throws are Blue Valley Northwest's Koby Chadick (1,812 passing yards) and Blue Valley's Anthony Abenoja (2,095 passing yards). Leading receivers for Blue Valley Northwest are Matt Ornduff and Casey Strohl, while PJ DeBey and Jacob McDermott lead Blue Valley in receiving yards. Chances are good that both teams come out firing.
What to Watch For: It's interesting that these two teams are playing one another after the dramatic ending to last year's game. Trailing 20-17 with minutes left, Blue Valley compiled a modest drive before Abenoja hit senior Luke Rampy with a long pass. It was questionable as to whether Rampy gained full control or not before losing the ball at the one yard line into the endzone. The alleged fumbled ball was recovered by another Blue Valley receiver to claim the touchdown and subsequent victory. But there was controversy as to whether the player was fully in bounds on the recovery. Regardless, both teams still have a very fond memory of how 2008 played out and this game should be a heated contest to say the least. Sticking with the theme of the Free State vs. Olathe North game, if you like offensive fireworks, you won't want to miss this game.
6A West Games
Wichita Heights (6-4) at Manhattan (10-0)
Dodge City (8-2) at Derby (7-3)
Posted by Eli Underwood at 3:48 PM