The high school football season will kick off in the Sunflower League approximately three months from today, and while three months seems like a long time I can assure you the season will be here in the blink of an eye. In the meantime summer weights programs, camps, and 7 on 7 tournaments will be the big talk. Here is an early look at some of the biggest news topics surrounding the Sunflower League football scene some three months prior to opening kickoff.

Perhaps the biggest offseason story was former St. Thomas Aquinas head coach Kevin Kopecky's sudden departure from the Aquinas and arrival thereafter at Leavenworth High School. The Pioneers, who haven't won a Sunflower League title during their 29 years in the league, welcome their fifth coach in the last 11 years.

Kopecky's exit from St. Thomas Aquinas remains a mystery despite early reports of health concerns. What is known is that Kopecky can coach evident by his impressive coaching resume. As a head coach Kopecky has put together a 150-99 record, including eight district championships in his 11 years at Aquinas and an appearance in the 2008 5A state championship game.

Regardless of why Kopecky left his established power of a program at Aquinas it appears that Leavenworth has three big reasons for optimism within its football program.

1.) Coaching
They're getting a local head coach with a superb coaching history on the field. His Aquinas teams never won a 5A title but it seemed like the Saints made the Sub-State round of the playoffs nearly every year he was with the school. Aquinas also won at least nine games in five of the last seven years Ko 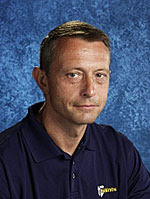 pecky (left) coached there. Could you imagine what the folks at Leavenworth would do for a nine win season, let alone a playoff berth? Playoffs and Leavenworth are two words that seem like antonyms, but make no mistake they may be meeting soon.

2.) Playoffs
The new district alignments have been kind to the Pioneers for the first time in years. One of the opponents is SM North who will be under the direction of new and first time head coach Dennis Grayless. SM North is coming off a 2-7 record. Wyandotte is in the district as well. The Bulldogs have harbored in 5A for years but were bumped up to 6A with the new district alignments. Wyandotte ended a 44 game losing streak in 2002, and has since sported a 9-55 record (but they did make the playoffs in 2004). The fourth team in the district is SM Northwest, who has enjoyed their fair share of success in recent years. While SM Northwest may be a tall test in year one the other two teams loom as possible victories for Leavenworth. Remember, in most cases two wins means you make the playoffs in Kansas district play.

3.) Confidence
Kopecky knows he can turn the Leavenworth football program around or else he wouldn't have taken the gig. Back in 2007 Southlake Carroll High School of Southlake, Texas--who at the time was arguably the nation's top high school football program--was trying to fill the vacancy left by their departed head coach Todd Dodge. I remember reading that one of the many applicants for the job was Kopecky. He had yet to claim a title at Aquinas and yet he had enough confidence in his coaching abilities to apply for the head job at a program that was coming off a mythical national championship.

And why not? Back in 1991 Kopecky took over at Ralston High School in Nebraska and within three years had the team in the playoffs. St. Thomas Aquinas was nothing more than a road bump on the KC high school football scene until Kopecky took over. The next challenge for Kopecky is Leavenworth. If he felt confident enough in his abilities to apply at Southlake Carroll, I have a suspicion he has the confidence necessary to change the culture of the Leavenworth football program.

Speed thrills and speed kills as evidence by the last ten years in the Sunflower League. While Olathe North has produced their fair share of mammoths on the offensive and defensive lines through the years, their superior speed at the skill positions has been their greatest ally. The Eagles lost alot to graduation but they do return two speed demons (that we know of) in 2010--and those two players happen to player quarterback and running back.

Option style quarterback Victor Simmons (who just received an offer from Kansas) and running back Adonis "A.J." Saunders will be the main speed cogs behind the Eagles push for their second consecutive 6A title, and ninth in 15 years. The Eagles also return Dominick Wilson who saw a decent amount of playing time in the Eagles backfield last year and has a decent set of wheels himself.


Can SM East finally break through?

The Lancers last wore a Sunflower League football crown in 1966 when they shared it with SM North. In th

e 44 years since the school has posted major success in nearly every sport but football. The football program even developed the dubious nickname of the "Smurfs" playing on the schools light blue colors and lack of success.

The combination of Todd Dain and John Stonner--the school's previous two coaches--drastically improved the quality of football being played at SM East but the school has yet to field a dominant team. After a strong finish to 2009 it appears the "Smurfs" might be shedding the nickname soon.

The Lancers head coach, Chip Sherman (left), has three state titles under his belt from his time at Platte County High School in Missouri, the latest of which came in 2002. His pedigree and track record is as good as that of any coach in the Sunflower League. Sherman also added veteran coach Sam Brown (who turned around the SM North program during the 2000s) to his staff during the offseason. The Lancers obvious improvement in Sherman's system combined with the fact that they return a good deal of experience could result in a scary group of Smurfs.
Posted by Eli Underwood at 6:35 PM