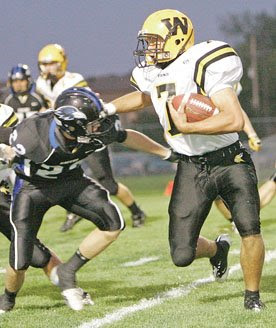 Key Stats: None, besides that fact that the Huskies pitched their first shutout of the season last week against BV North.

Strengths: Athletic quarterback, spreading the passing game out over the field

Weaknesses: Defense has been a liability, team doesn't have complete sense of winning

Summary: BV Northwest cleary saved their best football for the end of the season, but it remains to be seen just how good that football really is. The Huskies lost to BV West by one, lost to Olathe East in a defensive battle by 17, then won their next two games en route to this playoff matchup with SM West. Yesterday the CJ Power Ratings showed SM West as a 24.2 point favorite over the Huskies.

My Prediction: BV Northwest is obviously a much improved team from the group that was being blasted earlier in the season, but I don't feel the their improvement will be enough to beat SM West. SM West's home field advantage is also a big factor in comfort level -- when BV Northwest is the home team they march out of the locker room and literally walk across a parking lot to the stadium. SM West will benefit from playing at home in this one, and win the game with a physically dominating performance. SM West 28, BV Northwest 7.
Picture: Darron Harvey and SM West look to improve to 10-0 tonight against BV Northwest. Photo courtesy Lenexa Centennial.
Posted by Eli Underwood at 7:46 AM