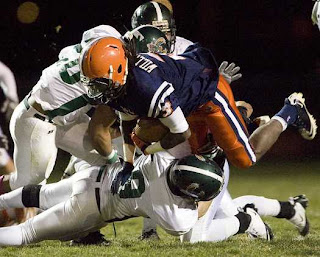 Olathe East 20, Lawrence Free State 16
Olathe East looked bound for their third straight opening-round playoff loss trailing Lawrence Free State 16-0 at halftime. Free State's offense played a stellar opening half . In the first quarter they jumped to a 3-0 lead on a 30-yard field goal from Antonio Schoneich. Their offense really started clicking in the second quarter starting with a four-yard touchdown run by Dylan Perry that gave them a 10-0 lead. Later in the quarter Perry added another four-yard touchdown run. The Firbirds' conversion attempt failed, but they still had a 16-0 lead. Just before the half things almost got more lopsided when Olathe East fumbled the ball away to Free State at the Hawks' own eight yard line. Fortunately for Olathe East, cornerback Junior Williams intercepted a Perry pass in the endzone to hault the onslaught.
Something clicked at halftime for Olathe East. On the Hawks' first offensive play of the second half Brandon Willingham (above) took a carry 59 yards for a touchdown. A successful two-point conversion pulled the Hawks within eight points of Free State. Both sides turned the ball over on their next possessions before Willingham scored a big one in the third quarter, busting lose on a "Simone-esque" 53-yard touchdown run. Olathe East failed on the two-point try, but had closed the game to a 16-14 score. Free State fumbled on the ensuing kickoff and Olathe East made quick work of a scoring drive with Willingham punching in his third touchdown of the day, this time from three yards out to give the Hawks a 20-16 lead. The score proved to be the decisive one.
Olathe North 48, SM North 21
Olathe North made some big plays early, as usual, but credit SM North for not backing down at the challenge. Olathe North's first score came on a two-yard run from Dominick Wilson. The Eagles added another touchdown when Victor Simmons scored on a 35-yard touchdown run. Things looked like they were headed for ugly, but SM North was able to respond with a nice drive that was capped off with a four-yard touchdown run from Kyle Goodburn. Olathe North scored their third touchdown on their next possession on a four-yard run from Adonis Saunders to go ahead 20-7. SM North was able to answer with several big plays on a drive that was closed out by Mitch Padden from one yard out, pulling SM North within seven. Simmons took a carry 54 yards into the endzone on the Eagles next possession. That score was matched by two-yard touchdown pass from Goodburn to Mason Perez seconds before the half. Olathe North led 27-21.
SM North wasn't able to hang with Olathe North in second half, however. The defending Class 6A champs scored first on a 67-yard run from Saunders. They followed that up with a 54-yard touchdown run from Simmons, and finally a 50-yard toss pass from Kyle Swartz to Brandon Davis to go ahead 48-21.
Olathe South 28, SM East 24
This game proved to be the biggest seesaw battle of the night. SM East looked right on course with their aerial success in the first quarter when Robby Moriarty connected with Elliot Faerber on a 63-yard touchdown pass. Olathe South responded in the second quarter with a drive that ended with a three-yard touchdown run from Nick Sands (below) to pull ahead, 7-6. SM East got the last punch in during the half when their kicker Chase Woofter connected on a 24-yard field goal to give the Lancers a 9-7 haltime edge. 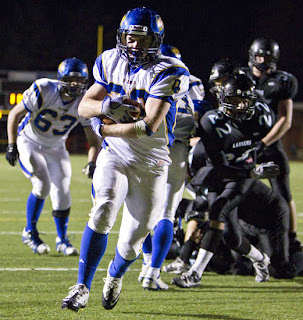 Olathe South established the second half attitude on their first possession of the third quarter, going 47 yards on an eight play drive that was capped off by a two-yard touchdown run from Sands. The touchdown put Olathe South ahead 14-9. SM East answered the score with a one-yard touchdown run from Jeff Cole, and a successful two-point conversion to jump ahead 17-14. It looked like the Lancers may have been able to hold that lead but Olathe South scored another touchdown on a two-yard run from Sands on their next possession. That score gave Olathe South a 21-17 lead, but SM East struck quickly yet again.
Moriarty led the Lancers down the field and Cole was able to punch in another touchdown from two yards out. Olathe South, keeping up with the flow of the game, drove down and scored a touchdown on a one-yard run from Frankie Seurer. With just over four minutes remaining it looked like "now-or-never" time for SM East. Moriarty was able to lead the team in Falcon territory, but a failed fourth down conversion turned the ball over. Olathe South's Jake Crist then busted loose on a 47-yard run into SM East territory that effectively ended the game.

SM Northwest 14, SM West 10
At halftime it looked like SM West was finally going to be able to shed the playoff victory drought that has plagued the program since 2007. The Vikings had established a comfortable 10-0 lead despite the absence of their top two running backs Tre Burt and Will Livingston due to injures. Defensively the Vikings had looked amazing, holding SM Northwest to a mere 14 yards of total offense in the first half. Armani Williams had scored from one yard out in the first quarter, and kicker Mark Whitrock stayed perfect on field goals with a 32-yarder in the second quarter. The second half was, however, a complete dichotomy for the Vikings.
Holding the 10-0 lead, SM West took a drive into SM Northwest territory early in the third quarter. The drive stalled, but they appeared to be in range for a Whitrock field goal. The ensuing field goal try was blocked by SM Northwest's Drew Goodger, who also managed to recover the fumble and begin advancing the ball. He then lateralled the ball to the speedy Kenny Mings who took it 65 yards to the house. SM Northwest was trailing by three, but they had all the momentum in the world. SM West fumbled on a drive early in the fourth quarter which resulted in a SM Northwest drive that started at the Vikings' 43-yard line. Seven plays later SM Northwest quarterback Stephen Mangelsdorf found Goodger on a six-yard touchdown pass. The score gave the Cougars a 14-10 lead with six minutes left. SM West managed to get as close as the SM Northwest 30-yard line but failed to score when Mings picked off a Williams pass at the one-yard line.
Photos courtesy the Kansas City Star
Posted by Eli Underwood at 10:46 AM

Falconlover is dreaming this is the year of the hawks. Looks like it will be an easy road to the state.

Does anyone know who the home team is between OS and ON????

What exactly is the formula for determining home teams after the first round???

Olathe South is the Home team and it is being played at ODAC....

For the clueless ones on the previous post that were talking about the Falcon's spread offense and the Falcon air attack, all I can say is that you are stupid...

The spread offense and passing game was last year, not this year.....

The falcons only threw the ball 3 times against SM East.... They run a Wing T offense and are primarily a running offense....

Richard Simmons is a fan of the Olathe North Eagles....

Wow, a lot of Southies on this board. The ON/OS game should be a good one, even though North beat them pretty handley last time out.

Eagles will roll. Mark my words. I'm not even an Eagle fan, but the Falcons only have so much in their tank..only enough for one upset. They can't hang with North's speed and athleticism.

Hahahhahaha you all Falcon fans are so hilarious!!!!! Keep dreaming! Gonna be a lot of suicides this Friday night...

Eagles will win all the way...

Falcons aerial attack will come out of the closet. OS can't run on North. Frankie will have a hay day. Look for a OE and OS matchup next week, should be a good one. Can't stop what they cant catch.

That is correct Clayton. OS CAN"T RUN ON ON. ON will go to a 5-3 or put 6 men in the box and completely take the run away, that is why the aerial assault will be launched, do you guys know nothing about football?

Clayton, you are a tool

Is the falcon aerial attack gay?

My son plays for SME. They rarely use five down lineman

olathe south is garbage and shouldnt even be mentioned in the same sentence as on they couldnt handle us week @ they cant handle us in the 2nd round of the playoffs ... clayton your the worst offensive linemen ive seen in years you should probably just choke yourself.

Am I the only one who thinks this will be a close game? I play for south and we are much better than we were the first time we played North. Everyone can trash talk and predict all they want. But the better team will move on when the clock hits zero.

It WILL be a close game.

Clayton tell everyone about OS playing in the mud at practice before the ON game last year. Got ur butts handed to u like will happen this year.

Falcons will soar above the Eagles....ON go play some powderpuff with the cheerleaders after the game as you will be eliminated.

Dream on Falconlover, Adonis will turn the burners on and leave you guys in the dust.

I wonder if the ON backs will put it on the turf like they are prone to do. I expect a case of fumbleitis.

Since Olathe south fumbled the ball at least 3 times on Friday.

Eli could you possibly post the all conference teams on here?

LOLOLOL @ Falconlover and Clayton!
See that you give out a "false" info on OS vs SME game....pathelic liar now I can see why OS is a losing team...

One fumble lost but three fumbles.

Eli, you need to get this board under control, I don't come on your website to read high school trash talk. I want to see well thought out comments on sunflower league football. Please start erasing and editing these children.

Last post. Take the diapers off. It is playoff time.

^ LOL!
and the OS vs ON game...*yawn*..I will leave at the halftime knowing that the Eagles will leads over 20 points something.....

clayton you are a bigot and a piece of shit

I never heard Clayton talking any trash. The ON players were talking the trash. OS played hard and showed who had a better run offense. ON stole one last night, thank goodness for Swartz, he can punt. Can't wait to see OE drill the Eagles like the did earlier in the year. I wonder if the Eagles will get shut out again....I think we all know they will.