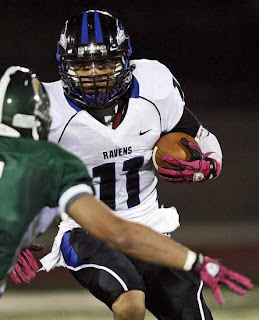 Lawrence Free State 35, Olathe Northwest 21
Olathe Northwest did their best to hang with Lawrence Free State, but in the end the Firebirds offense was too much to match. Free State scored the game's first two touchdowns on passes from Dylan Perry to Shawn Knighton and Desmond Wyatt of six and 24 yards, respectively. Olathe Northwest got on the board with a five-yard run from Leonard Parks (right) in the second quarter to pull within seven. Perry struck again through the air to Wyatt on a 20-yard pass to pull ahead two touchdowns. Parks added a nine-yard run for the Ravens before the half to once again pull within seven. Parks also opened scoring in the second half on a one-yard plunge which tied the game at 21. Perry, proving to be too much, broke free for a 62-yard touchdown run later in the third, and Henry Vaeono's touchdown run in the fourth quarter put the game out of reach for Olathe Northwest.
SM West 23, SM South 7
While SM West didn't put up the gaudy offensive numbers they had in past weeks, the Vikings handled business accordingly in their district opener. They got on the board midway through the first quarter when quarterback Armani Williams found receiver JJ Shara on a 31-yard touchdown pass. Before halftime kicker Mark Whitrock booted a 37-yarder to put the Vikes up 10-0. In the third quarter the Vikings found the endzone again through the air, this time on a 56-yard pass from Williams to DeAndre Graves. SM South, trailing 17-0, compiled a nice drive later in the quarter and quarterback Alex Forslund put the final touches on it with a 6-yard touchdown run. From then on neither team had much success offensively, but SM West was able to add two more Whitrock field goals, from 27 and 34 yards.
Olathe East 28, Blue Valley West 24
Olathe East's first drive of the game was easy--it totalled 76 yards and ended with a five-yard touchdown run by Brandon Willingham. Blue Valley West answered with a 35-yard field goal from Connor Childress to pull within four. Both teams added touchdowns before the half and Olathe East led 14-10 at the intermission. Blue Valley West opened up the scoring in the second half when Devin Rose found DeSean Warren on a 25-yard touchdown pass to gain a 17-14 lead. Olathe East responded with a long drive capped off by a 17-yard touchdown run from Austin Fulson to regain the lead, 21-17. The Jaguars countered that in the fourth quarter when Rose found Zach Epps on an eight-yard pass to jump ahead 24-17. Blue Valley West regained possession and looked poised to score, but Darion Lindsey fumbled on a carry and Olathe East capitalized, scoring four plays later on a 21-yard run from Fulson to gain the lead, 28-24, for good.
Olathe North 41, Lawrence 3
Lawrence High's injuries proved costly against Olathe North, as they had no answer for the the Eagles potent scoring attack. Olathe North's Adonis Saunders scored on runs of four and 15 yards in the first half, before Victor Simmons added a touchdown on a run of 48 yards. The Eagles led 20-3 at the half. Saunders broke open the third quarter with a 77-yard touchdown run, and that was all she wrote as Olathe North added two more touchdowns in the victory.
SM East 55, Blue Valley North 34
While SM East's defense left some room to be desired, the Lancer's offense was nearly unstoppable, producing 480 yards of total offense. John Schrock led the Lancers scoring three rushing touchdowns on nine carries, and also completing 15-of-19 passes for 209 yards and two touchdowns. Running back Adam Lowe added two more rushing scores for the Lancers (6-1) who face SM West (6-1) next week in what could be the best Sunflower League game of the regular season.
Olathe South 28, Blue Valley Northwest 10
This game was closer than 18-point disparity in the final score. Olathe South struck first on a three-yard run by Nick Sands in the first quarter. Blue Valley Northwest matched that in the second quarter on a one-yard pass from Garrett Fugate to Eli Woerpel. Sands punched in a 14-yard touchdown run in the third quarter to give the Falcons a 14-7 lead, but the Huskies wouldn't go away, adding a field goal to make the score 14-10 heading into the fourth. From there, Olathe South was able to establish themselves, adding two more touchdown runs from Sands to put the game out of reach.

SM Northwest 35, SM North 7
The Hula Bowl was lopsided in SM Northwest's favor, once again. The Cougars piled on 35 straight points before SM North would answer. Stephen Mangelsdorf had a great game for SM Northwest, throwing three touchdown passes and running for another. The Indians lone touchdown came in the fourth quarter when Kyle Goodburn connected with Mason Perez on a 21-yard touchdown pass.
Leavenworth 26, Wyandotte 6
At last, Leavenworth's losing streak is over. The Pioneers ended the 21-game streak with a solid victory over a Wyandotte team that had collected two wins on the season. Judson Cole opened the scoring for Leavenworth with a one-yard touchdown run in the first quarter. The Pioneers regained possession after a defensive stop, and soon after Jason Randall broke a 43-yard touchdown run to put the Pioneers up 12-0. The score carried through until the end of the third quarter when Cole hit Alec Zeck on a 30-yard touchdown pass to go up 20-0. Cline Baker caught a 42-yard touchdown pass from Cole to tack on the final score of the night.