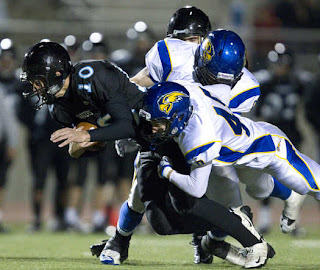 **Three of the first round games turned out to be quite thrilling, with SM Northwest and Olathe East both making substantial comebacks to claim victory.
**The Sunflower League's top four rushers (Brandon Willingham, Nick Sands, Adonis Saunders and Victor Simmons) will be playing for another week.
The Bad
**While second-stringer Robby Moriarty (above) played great in John Schrock's absence, it would have been nice to see what SM East could have done with Schrock--their starter for the first eight weeks--at the helm.
**Only three weeks remain on the 2010 Kansas high school football schedule.
The Ugly
**SM West's first round loss marked the third year in a row in which the Vikings have been dropped in the opening round of the playoffs.
**Lawrence Free State will have an entire off season to think about the 16-0 halftime lead they lost at the hands of Olathe East.

Individual Highlights
**Brandon Willingham recorded 33 carries for 190 yards and three second-half touchdowns in Olathe East's 20-16 victory.
**This is not an individual highlight, but it's worth noting that of Olathe North's seven touchdowns, five came on plays of 35 yards or more.
**SM Northwest's Kenny Mings returned a blocked kick 65 yards for a touchdown, caught a key 17-yard pass that led to SM Northwest's final score, and intercepted a SM West pass at his team's one-yard line which sealed the victory.
The Remaining Four
Olathe East (9-1): The Hawks' second half was spectacular but they can't afford any more first half let downs from here on out.
Olathe North (9-1): For the past several weeks the Eagles have been playing the best football of any team left in the 6A East bracket and they will be a tough out for any team.
Olathe South (7-3): It's been hard to gauge the Falcons this season but their win Friday was impressive. A win against Olathe North would be something else.
SM Northwest (6-4): Perhaps the easiest district in the state wasn't such a detriment after all? The Cougars made big plays when they needed to on Friday.
Photo courtesy the Kansas City Star
Posted by Eli Underwood at 9:43 PM

Eli can you put up the all league team?

3 days til the next games. I heard ON and OS game will be close. Someone said OS is going to come out throwing? That would surprise me?

The OS vs ON game will be a great one.... ON should not assume that they will win!!!

OS playing a passing game...must be from the team last year...LOLOLOLOL!!!! Keep dreaming.

All the way to the state, NORTH!

PS.
We have 3 Beagles and they're mean and of course rooting for the North too...

No talk of SMNW. What about thier domination over SMW? OE could be in for a game! Then a rematch vs ON if they can beat OS. Last time SMNW and ON played ON luckily squeeked by with a 1 point win.

I wouldn't be surprised is South will come in with a throwing game. Thats because they are horrible at reading a team. Even though the Eagles are the top of the league, they are not the best at defending against runs.

SMNW winning....dream on, everyone knows that SMW loses every year in the playoffs. If they were playing Leavenworth SMW would have lost. SMNW, congrats on getting to the second round, but the party is over. I do have to say that Jeff Meyers tends to choke in the playoffs, he is the Marty Schottenheimer of high school football. Hey, Lawrence handed it to OE....anything can happen!!