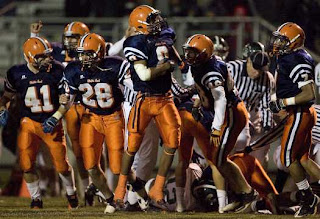 Eli's First and Ten
1. The smack talk between the Olathe South and Olathe North folks has been pretty intense ... it would be interesting to see what level it would be at if Olathe North plays Olathe East (right) in the Sub-State round.
2. You can call SM Northwest this year's darkhorse. Who would of thought the Cougs would make Sectionals after their disappointing 0-3 start to the season?
3. The Sunflower League's top three rushing offenses still remain in the playoffs--this doesn't seem like a coincidence to me.
4. Adonis Saunders and Victor Simmons combined to rush for 339 yards and five touchdowns on 27 carries. Those totals equate to 12.5 yards per carry. Sickening numbers, regardless of the defense.
5. If this year's Sectional matchups look familiar there's a reason for it. In 2007 the Sectionals featured the exact same four teams. Olathe East, Olathe North, and SM Northwest all sat at 9-1, while Olathe South was 7-3. Who came out on top? The team with the worst record--the Olathe South Falcons who went on to lose to Hutchinson in the state championship game.
6. With their Regional victory Olathe East claimed their ninth win of the season. The nine wins marks the sixth time the Hawks have reached that win total in the past eight years, which is more than any other Sunflower League team during that stretch.
7. We're nearing the announcement of the 2010 Simone Award candidates. While Gardner-Edgerton's Bubba Starling seems to be the clear favorite at this point in time, watch out for a Sunflower League invite or two. Brandon Willingham (1,617 rushing yards and 21 TDs) will most certainly be in the discussion.
8. The player with the ability to impact a game the most? Perhaps that title belongs to SM Northwest's Kenny Mings. His prowess on offense, defense, and special teams made him a nightmare for SM West last week, and he could cause similar headaches for Olathe East.
9. During the summer Olathe South head coach Jeff Gourley predicted that Nick Sands would rush for 2,000 yards. Sands currently sits at 1,470 yards rushing (147 ypg), 530 yards short of that plateau. It's highly unlikely Sands will reach those numbers unless Olathe South makes it to the state title game--but we'll keep it in mind just in case.
10. The team with the most pressure to perform? It's either Olathe East or Olathe North. The Hawks hold the top seed and are playing a four-loss SM Northwest team, while Olathe North is working on defending a state title.
Stat Leaders (among those still playing)
Passing Yards
Stephen Mangelsdorf, SM Northwest: 1,345
Frankie Suerer, Olathe South: 424
Trent Kuhl, Olathe East: 376
Victor Simmons, Olathe North: 299
Rushing Yards
Brandon Willingham, Olathe East: 1,617
Nick Sands, Olathe South: 1,470
Adonis Saunders, Olathe North: 1,413
Victor Simmons, Olathe North: 1,268
Austin Fulson, Olathe East: 749
Jake Crist, Olathe South: 676
Receiving Yards
Kenny Mings, SM Northwest: 413
AJ Spencer, SM Northwest: 296
Tanner Gentry, Olathe North: 276
Tackles
Tanner Ginavan, Olathe South: 112
Kyle Swartz, Olathe North: 96
Dylan Hanson, Olathe South: 93
Sam Todd, Olathe North: 79
Dylan DeVries, Olathe South: 77
Vince Gerstner, Olathe East: 76
Austin Fulson, Olathe East: 74
Greg Fry, Olathe South: 68
Interceptions
Kenny Mings, SM Northwest: 4
Taylor Sheffield, Olathe South: 3
Derec Olson, SM Northwest: 2
*SM Northwest player statistics do not include last week's game
Stats courtesy Mid-Statesports.com
Photo courtesy the Kansas City Star
Posted by Eli Underwood at 12:33 PM

I see no Olathe South players on "Receieving leaders" and they says there will be an "air game" this Friday night. ????

Listen you TOOL, South is a lot like North, they only throw the ball 2-5 times a game....

That idiot saying that the Falcons will have an air attack is a crack smoking hooker....

^ LOLOLOL "TOOL" and "CRACK SMOKING HOOKER'!!! So typical Olathe Southern that has no Life!
Anyway, I'm still laughing at you on "air attack" comment!!!

See you next year, Faglcons!

Both of you sound like total idiots. Why don't you just shut up and get off the site and let people enjoy the coverage. Really you two act as if this high school football is the only real thing in your life. How pathetic!!! If it was possible I hope both ON and OS could lose, but that wouldn't be fair to the players who have worked so hard this year. Cheer on your team and jab at your opponent ina fun way, but knock off the stupid chat.

My inside sources tell me the falcons may not bring the aerial assault this week as the forecast is calling for rain. OS coaches have scalped the plan and will now go with smash mouth football. They believe that wet conditions will equalize the teams and neutralize the speed of ON. I am glad they scrapped the aerial assault game plan.

There never WAS an aerial attack plan.

Clayton you are an idiot if you play for them and are getting on here and talking about your game plan. I'm sure your coach is really proud.

Has anybody noticed how poor the officationg has been lately. I'm a NW fan. And in that game against West there was some really bad calls. Non-fumble calls, intentional grounding. Placement of the ball. Alowing the runner to come out of the endzone after he was 2 yards in when he caught it. I could go on and on this year. I know it is not an easy job but they get paid pretty good money. Most of the time it is from a lack of hustle and being out of place on the call. Often the gather up and talk and still have no real idea what to call. No one ever really puts too much pressure on these crews considering they don't get called out on it much. I don't know if it is Mike Etnire or John Dehan who runs these crews but they better get on them or it is gonna get real bad.

^^ to the 3rd anonymous cried out loud "pathelic"..
If you don't like it why not YOU get the fuck out of here, pathelic little crackhead.

Oh, those whacky playoffs. Congrats Clayton and the Southies on a big win for the program, moving to another level...even bigger challenge this week. I'm still up two games on the O news for the year.

SMNW(6-4) @ OE (9-1) What a downer week for Viking fans, not only did we AND SME lose, but the hated Hawks managed to come back and squeak one out against Free State. Man, how I wish I could pick the cougs here but c'mon, let's face it, the cougs didn't beat the Vikings last week, West beat themselves (again). Up 10-0 at half and recover a fumble on the opening kick in NW territory...then total self destruct mode, blocked FG returned for TD, turnovers, penalties, the entire game played in NW's end of the field and they still managed to lose..It's become a mental thing with West in the playoffs now. Anyway, I think the coug D can hold down a suddenly very anemic Hawk offense but Northwest's offense did zip last week. Their only scoring came off a fumble recovered near midfield and aided by a silly West personal foul on a dead ball. East wins a low scoring tight game...OE 17 SMNW 6

Anonymous NW fan makes a good point...the officiating this year has been appalling. Is the Intentional Grounding rule different in high school than it is in college and the pros? Armani was two steps from the sideline when he threw that ball and threw it well past the line...that penatly loss led directly to the blocked field goal and the turn in momentum. Are there any officials on the site who can clear this up? Is there no 'tackle box' rule in high school?

Rain may be holding off. OS coaches bringing the aur assault plan back out. ON will be so. Off guard it won't even be funny!!!

The Impaler... No there is no "out of the box" rule for intentional grounding in high school. Any time a QB throws the ball with the intent to avoid a sack, it's intentional grounding no matter where he is. Problem with that is it leaves a lot of judgment toward the officials, who as you mentioned, aren't always the best judges.

Wow, okay. If that's the case then it was clearly intentional grounding. I think the rules comittee needs to take a serious look at that rule, it was changed in the NFL and NCAA to avoid QB injuries, I would think we should be at least as cautious with our high school athletes as we are with those at higher levels.

Wheres the all so-called "air attack" that you all Faglcons were talking about?

I agree both teams played hard, I was surprised South ran all over North. North really showed no running game. North's punter should be the MVP, he kept OS in bad field position, it sure wasn't the ON defense. Is that true that ON coach Pete Flood got arrested for theft last night? For stealing a game that everyone knows should have gone to OS....Stats don't lie!!!

Very funny, Faglconlover, ON didn't steal anthing they play on their fine game by taking advantage on your errors.

What stats? Seem that the ON has better stats than OS so far...

OS running back get's more offense than the entire North team..YIKES.. Eagles are in trouble. Any one taking bets that ON will walk away against East with a big fat 0 on the score board, seen it before. The weather did the Falcons in, coaches were planning on an air attack that would have had the Eagles on their heals and a victory for the Falcons.