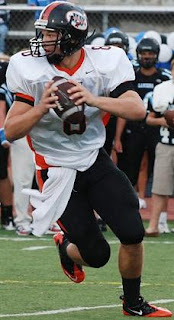 Sectional Round Playoff Matchups
All game times 7 p.m. on Friday
SM Northwest (6-4) at Olathe East (9-1)
Where: CBAC
Last Meeting: Olathe East defeated SM Northwest 28-0 on September 12, 2008.
Who to Watch For
SM Northwest
I named dropped Kenny Mings in yesterday's post, and I will do so again here. Mings is SM Northwest's best all-around weapon and perhaps the biggest reason why they upset SM West in last week. Stephen Mangelsdorf (right) has developed into one of, if not the best signal callers in the league over the past six weeks and he's the cog that usually gets the Cougars offense going. Also, you can't mention SM Northwest without bringing up Drew Goodger. The 6-foot-5 Goodger is among the top defensive lineman and tight ends in the league.
Olathe East
Without Brandon Willingham Olathe East probably wouldn't have come back to win against Free State last week. Willingham, the league's leading rusher, is a highlight reel waiting to happen and you can almost mark him down for 100+ rushing yards and two or more touchdowns per game. Willingham's running mate is Austin Fulson who might make more contributions on both sides of the ball than any player in the league. Quarterback Trent Kuhl hasn't thrown for many yards this season (because he hasn't had to) and Olathe East would probably prefer it stays that way. If Kuhl doesn't do alot of passing, it probably means Olathe East is doing well, and likely winning.
What to Expect
On one side you have a team (SM Northwest) with no inhibition. The Cougs started the season 0-3, won two games, got beat by Olathe North, and then swept an easy district and pulled an upset in Regionals. SM Northwest has no pressure in this game and they will likely play a pretty free spirited game, with Mangelsdorf getting his fair share of passes in. Olathe East could be described as the opposite. The Hawks narrowly escaped with a win last week and the last thing the Hawks want is another close game--because there are no guarantees that Willingham will go off for three second half touchdowns again.
Historical Stat
The Sectional Round game hasn't treated Olathe East well. Since 2002, the Hawks have advanced to an 11th game six times, losing in four of those games, including twice (2003 and 2004) when they were heavy state title favorites.
Olathe South (7-3) at Olathe North (9-1)
Where: ODAC
Last Meeting: Olathe North defeated Olathe South 30-7 in week two.
Who to Watch For
Olathe South
Nick Sands is second in the league in rushing yards at 1,470, while Jake Crist has added 676 yards on the ground to compliment Sands. Make no mistake, the Falcons are going to run the football, and run it alot. The Falcons are led defensively by Tanner Ginavan who now leads the league in tackles with 112. Dylan Hanson and Dylan DeVries are also great at stopping the run.
Olathe North
Olathe North will be leaning on its two biggest playmakers, Adonis Saunders and Victor Simmons, to get the offense going much the way they have throughout the entire season. But the Eagles are also loaded with speed and skill at other positions. Dominick Wilson is always capable of making a big play, and Tanner Gentry has been the go to receiver for Olathe North this season. Kyle Swartz and Sam Todd make the majority of the tackles for the Eagles on defense and they will both have to play well to curtail Olathe South's run game which is much improved since the team's week two matchup.
What to Expect
Olathe North had no problem dispatching Olathe South earlier in the season, but it seems unlikely that that Falcons will go down without much of a fight again. Olathe South seems to have found an new wind of confidence and it was evident in their victory last week versus SM East. Of course the same could be said for Olathe North. The Eagles' tandem of Saunders and Simmons is nearly impossible to stop when the two are clicking, and they have the speed to run free if Olathe South's linebackers can't keep them contained within the hashes. Only once in Olathe North's history has a team failed to make the state championship game the year after claiming a state title (the Eagles have won eight titles)--this year's Eagles know that and they will be doing all in their power to advance to the Sub-State game.

Historical Stat
Since the 1996, Olathe North and Olathe South have combined to make the 6A state championship game in 11 of the the 14 seasons.

Posted by Eli Underwood at 4:51 PM

smnw got blown out by olathe north? they lost by 2 points... late in the 4th quarter.

it doesnt say blown out it says beat..

Love it that the rushing leaders are still in the race. It's funny how teams that lose a game running the ball lack creativity or the coaching sucks. Fans cry out for more passes. Yet the teams that win state year in and year out are the ones that pound the rock. Generally the best teams at all levels, classes, states, run the ball 75% of the time. Even the 50/50 teams don't have a real showing. SMNW throws the ball the most and they are just happy to have won the first round.
I'm just throwing this out there for when the teams that lose tonight hear, "should have thrown the ball more."
It is tough as a fan to admit, but the boring ground and pound is the way to win championships. It's more fun for me to watch the ariel assault but I hope my favorite teams pound the ball.
Sidenote - I hope this board stays a place for mature football talk instead of childish banter with inappropriate language. Trash talk is fun, but keep it clean mature(ish).

I for one wish that Olathe north and Olathe south could both lose.

What was that "air attack" game that the Faglcon fans were talking about? LOL!

3 time the Faglcons failed at their own 10 yards resulted a turnovers....INSIDE 10 YARDS!!!! They could has least make some kicks to score and better than ZIP.

See you all idiots next year!

^ and they threw once to Nick Sands and run about 12 yards.

Congrats on a great season to the falcons and their fans.

Hater this is the week I hope our Eagles can redeem themselves!

^ Indeed I did...left at only 34 sec left and until later that night found out that Kyle Swartz rushed for TD....Dang it was freezing game last night and it took more than an hr to thaw my ass!

A real fan would have stuck it out.