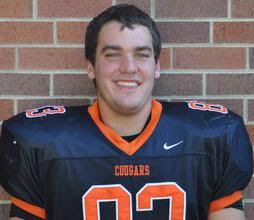 On Wednesday, SM Northwest's Drew Goodger (left) made a verbal commitment to play football at the University of Minnesota under new head coach Jerry Kill. Goodger chose the Golden Gophers over offers from Northern Illinois and Western Michigan. The 6-foot-5, 250-pound Goodger wreaked havoc on the Sunflower League during the 2010 season, claiming All-League, All-Metro, and All-State honors. During the season he recorded 103 tackles, 28 tackles for loss and four sacks, in addition to forcing seven fumbles.

Goodger joins Olathe North's Victor Simmons and Adonis Saunders as Sunflower League seniors who have committed to play football at division one schools next year.

I wonder if there'll be any arguements on commitments this year.

Eli and others, do you know what year the Sunflower had the most players to commit to D1 schools and who they were? Through the years what players from the Sunflower have gone on to play in the NFL?

Well the NFL players from the Sunflower League I know of is Darren Sproles, Ryan Lilja, & Ryan Torain.

The 2006 season (2007 graduates) had a loaded class. Blake Lawrence went to Nebraska, David Leonard to Wyoming, Brian and Ryan Murphy to Kansas, Christian Ballard to Iowa, Dee Bell to Kansas State, Jervon Graves to Utah State, and Free State's Mike Ruder had an offer to Wyoming but never accepted it. Here's a link to an article I did on recruiting in the league in past years.

Current NFL players from the Sunflower League are Darren Sproles (San Diego), Ryan Lilja (Kansas City), Ryan Torain (Washington), and Mike Rivera who has bounced around the league but was on the Dolphins roster in week 17.

Kids good player
runs like a 5.3 forty
he will be moved to DT and proably ride the pine
Go Eagles

whoever thinks he runs a 5.3 is stupid because that is not true..he is an athlete that can play at multiple positions

So, now that the new semester has started, did any of those rumored transfers go through? Are Root and Colbert walking the halls of Olathe North now?

Teddy Colbert is still at Olathe South, that didn't happen.

we have some new kid named Jimmy who was apparently from a team the won state this year. (Not Wichita Heights) His name is Jimmy or something, I couldn't hear what his name clearly. But I'm pretty sure it's Jimmy

Drew really does run like a 5.3 from being on the team with him

What about Tyshawn Root?

Treshawn Root is at North along with another tranfur out of Arizona named Orange Mooney. Highlights are on Youtube.

Goodger will be playing Tight End at Minnesota. He may not have the combine numbers, but he is one hell of an athlete and a dedicated worker.

So now that Root has transferred, what the heck does Olathe East have on offense besides their line? I remember two years ago, the running backs for their Sophomore (and JV) team was Tyshawn Root and Jordan Ward, both of whom left. I don't know of any QBs either.

Jordan Ward is at South and will more than likely be the workhorse tailback this coming year....

You have not a clue if you think Fritz will start in front of Jordan.... It is still up in the air IF Fritz will even play football his Senior year.... He had very few carries in Varsity last year with absolutely no success and his output and participation in JV games was no better.... He was extremely disappointed...

BELIEVE ME, I have sources very close to this team and what I say is correct....

Well, last year it seemed South had 2 primary running backs in Nick Sands, Jake Crist, with Kendal Harland getting a nice number of touches too. Does Ward, Wilbur, and Colbert take those three seniors' place? Are any of them going to be able to carry the same load that Sands did without getting hurt?

George Brophy deserves more credit than he deserves. He put Goodger to shame in game one this year when the Lancers beat NW 24-0. Go SME.

RE the previous comment about George Brophy and SME: Agree 100% -he deserves more credit than he receives. He was a difference maker in some critical games last fall. The SME offensive and defensive lines both distinguished themselves against SMNW and on many other occasions. The Lancers will be losing a lot of proven, talented linemen on both sides of the ball.

SME is bringing back some starters on both lines arent they?

goodger can have fun getting his as* kicked at minnesota

OS kick SMEAST arse? That sentenced didn't even make sense. Shows you the type of education you get out in Olathe.

Hey, atleast our worst school is better than SMEast. That school needs a major tune to the school, ON doesn't have graffiti and sh*t.
I also think that Olathe students are getting smarter. It really irritates me that we still have almost 20 year olds that don't even have their 1st science credit.
(I know this from being in class with them.) I bet that all the schools in Olathe will shape up mentally and professionally once these immature seniors finally leave.

There seems to be a lot of illiterate people, I'm guessing from Olathe that try and show support for their teams on this blog.

As for Goodger, the sunflower league and it's fans should be happy for the young man, not take kill shots at other players. The kid is a great athlete, and it'll be interesting to see how he does playing with the big boys.

As for Brophy, he does deserve more credit then he is receiving right now. The kid was a large part of East's success and has multiple offers both d-1 and D-2 ball. He's a hard worker and will find success wherever he chooses to go.