Book Review: When the Game Stands Tall by Neil Hayes 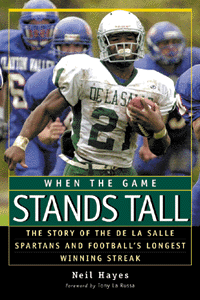 I spent the past few weeks reading the book When the Game Stands Tall by Neil Hayes, and I have to say it ranks up there with the top sports books I have ever read. Unfamiliar with the book? No worries, I was too. Fortunately I ran across the book on Amazon.com, and read some reviews that really raved about it. I decided to order the book and I couldn't have been more impressed.

When the Game Stands Tall covers the 2002 De La Salle football season. De La Salle is a private, all-boys Catholic high school located in Concord, California. As many of you may be aware, De La Salle holds the all-time record for consecutive wins in high school football. From 1992 through 2003 the team won 151 straight games, including 12 CIF Titles.

The book interlaces the journey of the 2002 season with the history of Bay Area high school football. If you are a fan of the book Friday Night Lights (another book I highly recommend), you will be sure to love When the Game Stands Tall--both books do a great job of relating the history and culture of the region to the acutal high school football teams themselves.

The De La Salle football program boasts alumni such as DJ Williams (Denver Broncos), Maurice Jones-Drew (book cover, Jacksonville Jaguars), Amani Toomer (New York Giants) and many others. Yet, its the work of the supporting cast of players, the players who aren't superstars, which truly defines the prestigious program.

The 2002 De La Salle team lacked starpower, size, speed, and just about every other intangible skill that previous De La Salle team's had taken for granted. Despite the challenges, mythical head coach Bob Ladouceur kept the team as close-knit as ever, and helped the group to battle through the challenging 2002 season, continuing The Streak.

When the Game Stands Tall goes in depth about the methods used by Ladouceur in keeping The Streak alive, and his methods for building up a team greater than the sum of its parts. One of the things I found most interesting was that Ladouceur (a 5-time USA Today high school Football Coach of the Year) never gives a pre-game speech to his team. Its his belief that his teams get mentally prepared and ready to go the night before the game, and need no further prodding come gametime.

Another interesting tid-bit is that Ladouceur requires his players to make a commitment card each week, with each player listing something they will do during the week in the weight room, on the practice field, and during the game. Each player works towards the goals on the card during the week, and the night before the game the players all dedicate the card and their effort to another player on the team. The player who receives the card is to make sure the player whose card they received actually completes the goals on the card.

Ladouceur credits the majority of his success on this system. He believes it creates a system in which his players have enormous camaraderie with eachother, and also work harder so as to not let each other down. With a career 343-22-1 record, its hard to argue his system of success.

If you're looking for a book on sports, life lessons, goals, or just an intriguing novel, you can't go wrong with When the Game Stands Tall. I would recommend it to anybody, especially if you are a fan of high school football.
Posted by Eli Underwood at 12:18 PM

Eli
I liked your review of the book "When the Game Stands Tall" and would encourage all high school football coaches, players, parents and fans to read it. I also enjoyed the book when I read it last year. I would love to watch the DVD that was filmed about the same time but have never been able to come up with one.
Tim at www.kansasprepfootball.com

I was actually able to find a documentary on that season. The film was released in 2004, but covers the 2002 season--the same season "When the Game Stands Tall" was written about. Here is the Amazon link:

Eli
I could not make the link work.
Tim

Not sure why that link won't work. Try searching this on Amazon:

"1: The Story Behind the Longest Winning Streak in Football History"