I did a little research into the Rivals.com prospect database to see the Sunflower League players that have been considered "Division-One Caliber" over the past decade. Unfortunately, Rivals.com did not start ranking prospects nationally until 2002, so the Division-One players from the early 2000s and before do not appear. Here is what I came up with on a year-by-year basis since the class of 2002. Another thing to keep in mind is that "Division-One Prospects" are not necessarily the best players in the Sunflower League. Rivals rankings are based on potential, and not always production.
*Players listed in bold received Division-One offers in high school.
2002
Maurice Mack, Olathe North
Royal Whitaker, Olathe North 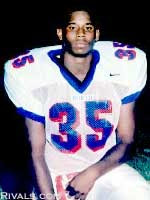 Jonathan Lamb, Olathe North
Whittaker Potts, SM East
Mack was ranked by Rivals.com as the 30th best cornerback in the nation, although he went on to play linebacker at Kansas State...Whitaker (right) had a Big Ten offer from Minnesota, but elected to play D1-AA football at Southern Illinois...John Lamb had a successful career as a safety and receiver at Kansas after he earned a spot as a walk on.
2003
Jim Bouknight, Olathe North
Roy Loren, SM East
Andy Schumm, SM South
Derrick Newman, Lawrence
Adam Venegas, Olathe North
Brandon McAnderson, Lawrence
Beau Gadwood, SM Northwest
Venegas went on to have a dominant career on the offensive line at North Texas...McAnderson starred as a running back for Kansas, and helped the Jayhawks to win the 2007 Orange Bowl...despite rushing for 2,793 yards and winning the Simone Award as a senior, Bouknight did not go on to play Division-One football.
2004
Ryan Torain, SM Northwest
Josh Lawrence, Lawrence
Todd Haselhorst, Olathe East
Mike Rivera, SM Northwest
Dain Dillingham, Lawrence Free State
Haselhorst was one of the most highly recruited offensive lineman in the Midwest as a senior, and he went on to play at Kansas...Rivera enjoyed a dominant career at SM Northwest before moving on to player linebacker at Kansas, and now the NFL, where he plays for the Chicago Bears...Dillingham had several offers for football, but elected to attend Drake University to player both football and basketball...Torain didn't receive an offer out of high school, but eventually made it to Arizona State after a couple JUCO seasons at Butler C.C...Torain is now in the NFL as a running back for the Denver Broncos.
2005
Mack Brown, SM North
Connor McKay, SM South 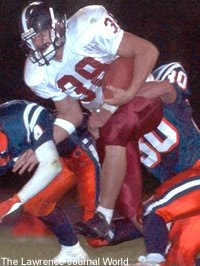 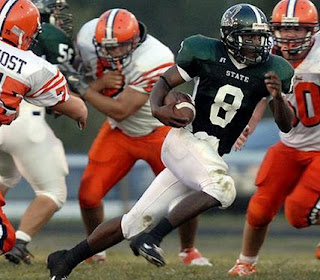 Dorian Williams, Olathe East
David Leonard, SM West
The class of 2007 was as loaded in terms of talent as any class over the decade...Ballard went on to play defensive end and Iowa, and was a starter there last season...Ryan Murphy (right) plays cornerback at Kansas, while his twin Brian Murphy transferred from Kansas to Emporia State to receive more playing time...Lawrence has received quite a bit of playing time at Nebraska and is penciled in to start in 2009...Leonard has been a focal wide receiver for Wyoming for several seasons now...Jervon Graves has started at defensive end at Utah State since his freshman season...Bell plays running back at Kansas State but still hasn't cracked the top of the depth chart...Ruder had an offer to Wyoming during his senior season before he tore his ACL in a pick up basketball game...Ruder now plays defense at D1-AA Missouri State. 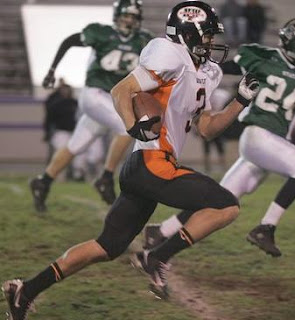 Darron Harvey, SM West
Mark Fancher, SM Northwest
Fancher (right) received a late offer to play at Air Force where he will be a receiver this upcoming fall...Scott and Harvey both had offers from Army, but Scott elected to play at the University of Nebraska-Omaha, and Harvey at Butler C.C...Kevin Young had offers from all over the nation and ultimately decided on Kansas after decomitting from Nebraska.
2010
Michael Lisher, Lawrence Free State
Lucas Vincent, Olathe North
Tre Walker, Olathe North
Dallas Buck, SM North
So far, the class of 2010 only has four players listed as potential prospects, although that list is sure to grow during the season...Vincent committed to Missouri in April to play defensive line...Walker has committed to Kansas State.
Posted by Eli Underwood at 10:13 PM