Olathe North 49, Blue Valley 35
The glaring difference in victories for both teams was basically thrown out in this contest. In similar fashion to last season the game proved to be an offensive showcase. Olathe North only led the one-win Tigers by a touchdown at the half, but scored four touchdowns in the second half to pad the lead. James Franklin once again led the Eagles with 241 yards and two rushing touchdowns on 29 carries. Olathe North quarterback Victor Simmons also had a great game, rushing for four touchdowns.
Lawrence Free State 55, Leavenworth 0
It appeared as though Free State was able to take out a bit of their frustration from last week's loss to Olathe North on Leavenworth. Free State's Kirk Resseguie (below) scored touchdowns on runs of 1, 3, and 10 yards, but the big stat man was Camren Torneden. The senior quarterback rushed for three scores, passed for another, and returned a punt 71 yards for his fifth touchdown. The Firebirds will be focused on keeping their crosstown rival Lawrence High winless this upcoming Friday. 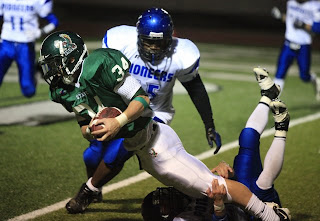 SM West 20, SM Northwest 8
Although the game was anything but flashy, SM West established their run game early and never looked back. The defining moment was a 69 yard touchdown burst by DJ Balazs which put the Vikings ahead 13-0. Cordi Pascal also added two rushing scores for the Vikings who shutout the Cougars up until the last few minutes.
Blue Valley Northwest 27, Olathe East 21
Olathe East starts district play 0-1 after a disappointing loss at the hands of one of their former assistants, Mike Zegunis, and his Blue Valley Northwest Huskies. The star of the game was Husky receiver Matt Ornduff (arguably the top receiver in Johnson County), who had touchdown receptions of 37, and 85 yards. Olathe East was down 27-7 at one point in the third quarter, but made a valiant effort to get back into the game. Two Carter McEntee touchdown passes got the Hawks within six, but they weren't able to collect another score.
Blue Valley West 15, Olathe South 14 (All Star Video Sports Highlights)
The Falcons of Olathe South rolled up colossal offensive numbers--both good and bad--in their district opener. Despite gaining 443 yards of total offense the Falcons turned the ball over six times. Blue Valley West was able to capitalize on the mistakes in the form of two touchdowns, one coming in the fourth quarter that put the Jaguars up a point for good. Falcon quarterback Tanner Dutton completed 29 of 45 passes for 342 yards, but recorded no touchdowns.
Blue Valley North 21, SM South 3
SM South jumped out to a 3-0 lead in the first quarter on a field goal, but the Raiders weren't able to anything more offensively. The Mustangs from Blue Valley North added three touchdowns--one in the second quarter and two in the fourth--to deny the Raiders a winning record through seven games.
SM East 20, SM North 13
No official box score of the game has been released, but what is known is that SM North lost its fifth straight game, while SM East pushed its record to 3-4. One of the SMSD Nut Cups was awarded to the Lancers for their win.
Olathe Northwest 49, Lawrence 6
Olathe Northwest had good reason to celebrate on Friday. Their 49 points set a school record for points in a game and they also look primed to make the playoffs with lowly Leavenworth coming up next week. The 49-6 victory was best characterized by the Raven's Cullen Phillips, who carries the ball 20 times for 96 yards and two touchdowns.
Posted by Eli Underwood at 4:29 PM

Only 5-3 last week as the EKL dominated our Sunflower League…all three losses were Blue Valley Schools winning! Still 21-5 for the year so far…

BVN-OE Can the Hawks rebound from a very disappointing loss to the Huskies? I have to think that East needs to win this one to salvage some Sunflower pride (and make the playoffs)! …OE 27 BVN 14

BVNW-SMS No pride will be salvaged here…the Huskies ARE indeed for real and looking to claim the #2 seed (does anyone know how a SMW-BVNW tie will be broken for seeding?)…BVNW 41 SMS 6

BVW-ON The Sunflower should at least cruise in this one. The Eagles should fly to 9-0 and the #1 seed now with no problems…ON 40 BVW 14

BVHS-OS I still like the 1-6 Tigers to win their last two games and make the playoffs, presumably as the #7 seed. OS needs to hold on to the ball and play better defense if they’re going to have any chance in this game…BV 29 OS 24

SMW-SMN The Vikings also have faced and passed their toughest district test and should easily sail to 8-1. The Indians are not playing well…SMW 37 SMN 0

SMNW-SME Neither team has a single quality victory this year. The Lancers have shown steady improvement. Nowak was horrible against SMW last week both passing and kicking. Still the Cougar running game will overpower the Lancer D…SMNW 21 SME 14

ONW-LV Well, Pioneer fans, this is where I thought things might get a little better but after the Ravens hung 49 on the hapless Lions of Lawrence High last week, the blowouts may well continue. Look for the Ravens to claim the #6 seed at 4-5 with an easy win here…ONW 38 LV 7

LFS-LHS Oh, dear. The Lions have simply quit the last two weeks and this figures to be brutal. Free State rolls in this one but still with their week one loss to OE, they probably can only be the 4 seed. The good news that that will probably result in a rematch in playoff game 1 with those very same OE Hawks…LFS 70 LHS 0


A note for Viking fans….being seeded #3 would probably be a lot better for us than being #2 for two reasons. ONW figures to finish 4-5 and be the higher (6) seed but I think I’d rather play them in the first round than the presumptive #7 seed BVHS at 3-6…also due to the bizarre KS home field rules we’d actually be the HOME team in the second game looking for revenge against BVNW. Of course if we survived those two we’d have to play at Olathe North in the semi-finals…