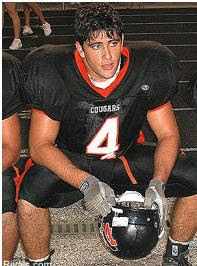 Of all the linebackers listed, it was perhaps Rivera who best fit the mold of a true, run-stuffing, dominant linebacker. Rivera imposed his will on the Sunflower League for several years with his big frame, as was the only linebacker on the list who earned All-State Class 6A honors more than once.

As a junior, Rivera was one of the lone bright spots for SM Northwest. The Cougars battled through and up and down season which culminated in a Regional Round playoff loss to Olathe East, 11-7. SM Northwest finished the 2002 season with a modest 5-5 record, but for players like Rivera, that wasn’t good enough. Rivera led the Cougars that season with 125 tackles from his middle linebacker position, and for his efforts he was awarded All-State Class 6A at linebacker. Quietly during the off season, Rivera and his fellow seniors were brewing what would become one of the better SM Northwest seasons of the decade.

After starting the 2003 season 1-1, Rivera and company rattled off eight straight wins. Rivera dominated as a middle linebacker, while also complimenting the offense from the tight end position. Running mate Ryan Torain (who played for the Denver Broncos for several seasons) rushed for over 1,600 yards on offense giving SM Northwest one of the best football teams in the KC Metro.

In the Regional Round of the playoffs SM Northwest dispatched SM south 41-26, and advanced to play defending 6A State champion Olathe North in the Sectional Round. SM Northwest fell behind early against Olathe North, and was never able to overcome the deficit, losing 17-7. Rivera and his teammates finished the season 9-2, the school’s best finish in years.

Rivera collected 149 tackles on the season, and was once again awarded All-State Class 6A honors. Rivera was a finalist for the Buck Buchanan award, given annually to the best interior football player in the Kansas City metro. Rivera was also named First-Team All-Metro Sports at the linebacker position.

Following the season Rivera accepted a scholarship offer from Kansas University. He was a three year starter at outside linebacker, and helped lead KU to an Orange Bowl victory in 2007. He is currently in the NFL on the roster of the Tennessee Titans.
Posted by Eli Underwood at 12:25 PM

O North Is all that is wrong with the world.

Because we end your dreams? By the way from an O-North guy Rivera was a STUD best defensive HS player I have ever seen in person.

2-1 Onorth 2-1 Oeast 4-0 Onorthwest
4-0 free state, never lost to any shawnee mission 2-0 lawrence. Results from my 3 years as a varsity football player. can you figure out what team i played for or what years.

Its ok to follow the sunflower league and cheer for your old school, but come on man, quit living in high school

Olathe South? Did you win confrence or state?

Nobody is living in the past.

I don't think your numbers are acurate...i say BS

Ya I would say someone is