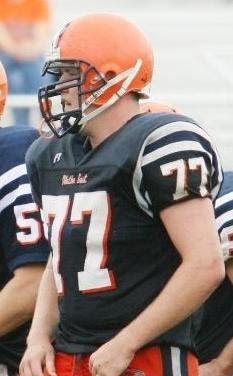 Jake Woten could have been on the list as a defensive or offensive lineman. He is one of the few players on the list who was as dominant on one side of the ball as the other. Given the position constraints, I placed Woten on the list as an offensive lineman. Woten received All-Sunflower League honors as a junior in 2007, after helping lead Olathe East to a 9-2 record and Sectional berth in the playoffs. A loss to Olathe South in Sectionals sent the Hawks home, but the school’s talented junior class, led by Woten, was prepping for a dominant 2008 campaign.

The 2008 regular season couldn’t have gone any better for the Woten and the Hawks. The team cruised to a 9-0 record, including a sweep of the other three Olathe school. Woten was as much a part of the success as anyone. He led an offensive line that helped running back JaVon Williams rush for over 1,200 yards and 21 touchdowns. Behind the offensive line Olathe East was scoring 30 points per game. However, the playoffs didn’t go as planned for Olathe East.

The Hawks drew the short straw, and had to play a very solid 7-2 Olathe North team in the Regional Round of the playoffs. Despite a solid effort from the Hawks, Olathe North was able to capitalize on more that day, and ended up winning 22-15. Olathe East would have to go home, 9-1, after suffering their first loss of the season.

Woten’s efforts, however weren’t overlooked. In addition to the offensive line success, he totaled 77 tackles, 10 sacks, and 17 tackles for loss. For his career he collected 21 sacks, 30 tackles for loss and 116 total tackles. He was also the most dominant blocker in contributing to JaVon William’s 3,200 career rushing yards. For his efforts he was named First Team All-State Class 6A, and Kansas Top 11. He was also a finalist for the Buck Buchanan Award, and named First Team All-Metro Sports at the defensive line position. Woten has since gone on to play football at Butter County C.C.
Posted by Eli Underwood at 12:52 PM

Oh trust me, Michael Lisher hasn't been overlooked by any means.