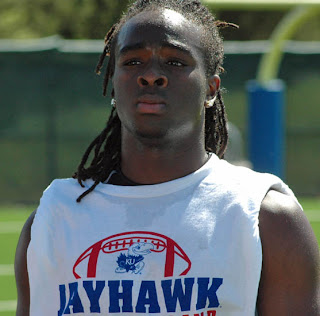 Stat to Note
Last season Willingham split time at running back with senior Hayden Groves, and still managed to come away with 909 rushing yards on 128 carries. Willingham was even more of a stud in the secondary recording 64 tackles and two interceptions to garner First Team All-Sunflower League honors as a defensive back.

Scouting Report
Willingham, a native of Boynton Beach, Fla., was one of the most consistent playmakers in the Sunflower League as a junior and there is no reason to expect any different in 2010. Willingham's game is a very unique, and when you watch him play its hard to put a finger on what it is that makes him such a talented player.

Willingham's speed is good, but he doesn't necessarily possess the "after burners" of former Olathe East greats Andre Jones or Dee Bell--and Willingham is also a bit undersized for his positions. What does jump out about him is a sort of smoothness he displays on the field.

After starting on both sides of the ball for a season Willingham should be primed for a huge senior campaign. Willingham's rushing (909 yards) and interception (2) totals should show significant increases in 2010.
Posted by Eli Underwood at 11:08 PM