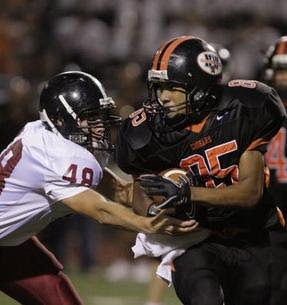 SM Northwest
After four long weeks the Cougars (led by Kenny Mings, on the right) finally collected a win. On an even brighter note, SM Northwest could easily go 4-1 in the final month of the regular season.
Olathe East
The Hawks scored nine touchdowns against Leavenworth with relative ease, and further illustrated why they are the league's lone undefeated team.

Olathe North
The only way Olathe North was going to get over last week's loss was with a victory in week four and they were successful, handling a previously undefeated SM East team.
Three Down

Lawrence
SM Northwest practically invited the Chesty Lions to overtime by turning the ball over on downs late the fourth quarter, but Lawrence botched a field goal attempt that would have tied it.
SM North
SM North was clearly overmatched, once again. Free State had no trouble putting 32 points on the Indians by halftime.
Leavenworth
Olathe East's 62 points marked the 10th time in the past four years (or 31 games) that a team has scored 50 or more points against the Pioneers.
Individual Highlights 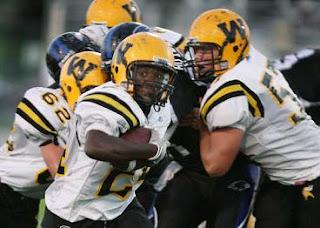 **SM West's Tre Burt (right) rushed for 245 yards and two touchdowns on 32 carries in his team's 36-20 win over Olathe Northwest.
**Olathe East's Brandon Willingham had an encore performance to his impressive week three totals. Against Leavenworth Willingham rushed for 115 yards and four touchdowns on only eight carries.
**In workhorse-like fashion, Olathe South running back Nick Sands ran the ball 39 times for 279 yards and two touchdowns and he now leads the Sunflower League in rushing with 560 yards.
Week Five Power Rankings
1. Olathe East (4-0): The Hawks have meshed well and are playing the best football in the Sunflower League.
2. Olathe North (3-1): Olathe North got back on track with a solid victory over previously undefeated SM East.
3. SM West (3-1): For the second week in a row the Vikings were able to wear down their opponent and seperate themselves in the fourth quarter.
4. SM East (3-1): The Lancers played well despite their loss, and the team is ten times better than what they were at this point in time last season.
5. Lawrence Free State (3-1): Quarterback Dylan Perry's injury did little to slow down the Firebird's potent offensive attack.

6. Olathe South (2-2): The Falcons look and play like a completely different unit when they have success early with the run game.
7. Olathe Northwest (2-2): Olathe Northwest is no longer the punching bag they were in the 2000s--this team has developed quite a bit.
8. SM Northwest (1-3): The Cougars will likely make up for their terrible start with a finish above .500.
9. Lawrence (2-2): Lawrence still has a ways to go before they are a threat again, but this year's team plays with alot of heart and could pull an upset or two down the road.
10. SM South (1-3): The Raider's offensive woes continued in week four--this team needs a victory, soon.
11. SM North (0-4): SM North's latest loss pushes their losing streak to 11 games and makes you wonder just how much better they are than Leavenworth, if at all?
12. Leavenworth (0-4): The Pioneers' October 15th matchup with Wyandotte can't get here soon enough.
Stats courtesy Mid-statesports.com