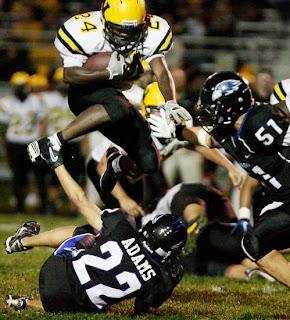 Early on it looked like Olathe Northwest may be able to pull of an upset against SM West. A 68-yard run by Connor Middleton and a 93-yard kickoff return for a touchdown by Nick Bandy gave the Raven's an early 14-3 lead. SM West scored on run plays of one and five yards by Danny Dowling and Cordi Pascal, respectively, pushing the Vikings ahead 16-14. Just before the half Nick Prologo added a field goal to give the Ravens a 17-16 halftime lead. In the third quarter Prologo tacked on another field goal, before SM West went on to score 20 unanswered points on three rushing touchdowns. Tre Burt (right) scored two of the touchdowns, on runs from 20 and 27 yards.

Olathe East 62, Leavenworth 6
Olathe East made sure there would be no letdown after their big win last week. The Hawks recorded nine touchdown on the night, and led 49-0 at halftime. Brandon Willingham, who did not play in the second half, led Olathe East in rushing with four touchdowns and 113 yards on only eight carries. In total, Olathe East's 51 carries went for 358 yards and eight touchdowns. Leavenworth's lone touchdown came on a fourth quarter run by Gregg Lowery.

Olathe South 31, SM South 7
Olathe South looked dominant on the ground once again, rushing for 355 yards and three touchdowns in their victory against SM South. Kendal Harland put Olathe South on the board with a 19-yard touchdown run in the first quarter. Nick Sands added touchdowns on runs of 45 and one yards before the half. Leading 24-0 in the fourth quarter, Harland had another big play when he returned a punt 68 yards for a touchdown. SM South got on the board late in the fourth quarter on a 7-yard run by Alex Forslund.
SM Northwest 23, Lawrence 20
A questionable call late in this game nearly cost SM Northwest their first victory. Leading 23-20, SM Northwest gained possession and proceeded to down the ball on three consecu 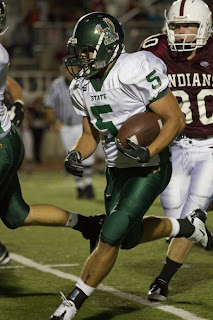 tive plays. With 15 seconds left the Cougars elected to pass the ball instead of punting it away. The play failed miserably, and Lawrence gained possession at the SM Northwest 15-yard line for an easy field goal. A botched snap ruined those chances and SM Northwest claimed their first victory of the season. SM Northwest was led by the defensive effort of Drew Goodger who recorded four first half sacks, and Kenny Mings whose late game interception prevented Lawrence from tying or gaining the lead.
Lawrence Free State 46, SM North 7
An injured ankle did little to slow down Dylan Perry and Free State, despite the fact that he only played the first half. Preston Schenck (right) scored early on a 60-yard touchdown run, and added two more scores on runs of 21 and three yards. The Firebirds led 32-0 at the half, and never looked back.

As we approach the mid-season mark this week, we realize that under the current system in KS, the first 6 games of the season are meaningless other than to team moral and games 7-13 are where glory is won and bacon is brought home. It seems to me the districts are becoming pretty clear with only a handful of truly contested games left in the season. The big games remaining are: SME-LFS, SME-SMW, LFS-ON and OS-BVW (OE-LFS will also be a good game but relatively meaningless to pairings). Here's a look in the crystal ball at potential playoff pairings:


Dist 1 – WYAN (1-3), LV (0-4), SMN (0-4), SMNW (1-3)...possibly one of the worst districts ever in 6A KS football. Although the Cougs are clearly down this year, I still expect them to slice through this district like a hot knife through butter. As to the other three teams, who knows? I don't believe WYAN will be able to compete on a level with any Sunflower league team, playing much weaker, smaller class schools all year and mostly losing. That said I think LV will not be able to beat SM North so I'm going to go with the Indians to make the playoffs as the fourth SM team at 2-7. This weak district will hurt the Vikings in round 1 as we'll see later. Champ: SMNW Runner up: SMN

District 2 – BVN (1-3), SME (3-1), SMS (1-3), SMW (3-1) The most cut and dried district, Obviously SMS and BVN have no chance here and SME and SMW will advance. Right now I have to go with the Vikings to win that game but that prediction might change depending on how the Lancers fare against Free State. It might actually HELP the Vikings in the pairing to lose the SME game and get to play the 4 seed (SMNW) in round one. Champ: SMW Runner up: SME

District 3 – OE (4-0), OS (2-2), BVNW (1-3), BVW (1-3)...Clearly OE is the heavy favorite here. They look unbeatable and should be 9-0 and top seed. OS and BVW both were highly ranked at the start of the year and got off to atrocious starts. Both have played better against weak competition lately. I think the Jags have too much offensive punch for the leaky Falcon D and win a shootout to claim a playoff spot. Champ: OE Runner up: BVW

Playoff seedings: Obviously OE is the 1 seed and SMNW is the 4 seed. If everything goes as expected, ON gets the 2 seed based on head to head win over SMW who should be the 3 seed. Due to the bizarre pairing rules in KS, the ON/SMW bracket will get the two runners-up from the OTHER districts, probably SMN and BVW. Now normally a team with a losing record like BVW is likely to have (4-5?) would get the higher seed (ON) but SMN will likely have a worse record (2-7) and get paired against ON while SMW gets BVW for a very rough first round game again. In the other half of the bracket, this week's SME-LFS game will be critical. The loser Friday night is likely to be paired against #1 OE in the first round while the winner will get #4 SMNW. Clearly a big difference.