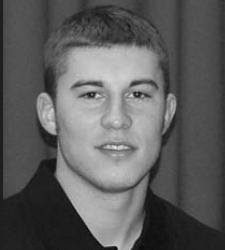 With Brooks Faddis the question wasn’t about what position he was playing, but rather how much damage he was going to inflict on the opposition. Faddis, who possessed some of the best wheels of any player during the decade, was along with Anthony Parks only the second player on the list to gain All-State recognition in two different years at two different positions.

Everyone in the SM North program knew Faddis was a special talent, but it wasn’t until the fifth game of the 2001 season (Faddis’ sophomore year) against SM South that the KC metro really knew about him. Splitting duties at the quarterback, receiver, defensive back, and return positions, Faddis had a game for the ages. He caught five touchdown passes of 41, 20, 78, 46, and 25 yards, threw a 35 yard touchdown pass, rushed for 25 yards, returned a punt for 40 yards, and intercepted a pass. His five touchdown catches had come among nine catches for 289 yards. Faddis’ performance in the game earned him national recognition with Scout.com where he was mentioned for having had one of the best games of the 2001 season. SM North failed to make the playoffs, but Faddis received All-Sunflower League honors for his efforts.

As a junior in 2002, Faddis started at quarterback, defensive back, and returned punts. With Faddis as the si 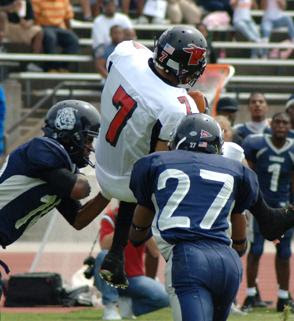 gnal caller SM North won their district, before losing in the Regional round of the playoffs, finishing 6-4. Faddis passed for 15 touchdowns and rushed for 10, and was named First Team All-State Class 6A at the quarterback position following the season.

As a senior in 2003 Faddis was converted back to his more natural position of receiver on offense, while young gun junior Mack Brown took over at quarterback. Faddis also started at defensive back and as a return man.

Faddis and Co. had the first game of the 2003 season circled on their calendars all offseason. The game was against Olathe North, who was coming off a third straight 6A state championship and boasting a 38 game win streak. The head coach of Olathe North’s dynasty, Gene Wier, had left to coach in Texas following the 2002 season, and long time Olathe North assistant John McCall had taken over the head coaching duties prior to the 2003 season. With the majority of the Kansas City metro rooting for an upset, SM North delivered. The game was relative stalemate throughout, but it was a 15 yard touchdown catch by Faddis that gave SM North the necessary points to win. The Indians ended Olathe North’s win streak with a 7-6 victory.

SM North once again went 6-4 and lost in the first round of the playoffs, but Faddis’ efforts were well documented. After the season he was named First Team All-State Class 6A as a receiver, his second consecutive year on the team. Faddis went on to play at Central Missouri, where he enjoyed success early on as a receiver before several knee injuries ended his playing career.
Posted by Eli Underwood at 8:34 PM

Dude was great but got screwed by his HEAD coach his Senior year and it probably cost him numerous scholarships.

Thats right I remember now his HEAD coach had a son that wasn't near as good but his daddy pulled the All State QB so his son could play QB. HMMM weird isn't it?

Was the most hard working, dedicated, young man I'd ever seen and was a joy to watch on that football field every Friday night!

Dude is a pill head.

Brooks isn't a 'pill head'. Whoever says that had better remain anonymous for his personal safety