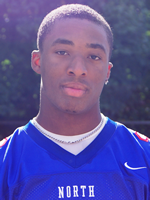 The 2009 season was the measuring stick for the legacy James Franklin would leave behind. The Olathe North football program easily boasts the most prestigious list of alumni, especially at the running back position, and it was Franklin who was on the verge of being remembered as one of the greats. He only needed a state championship ring and a Simone Award to do so.

Franklin competed for and initially gained the starting running back position for Olathe North as a sophomore in 2007. Despite not being the primary ballcarrier for the entire season Franklin put up 1,142 rushing yards and 16 touchdowns in a 12 game season. The season ended on a sour note however, when Franklin and the rest of the Eagles performed poorly on the door step of a state championship appearance in the Sub-Stat 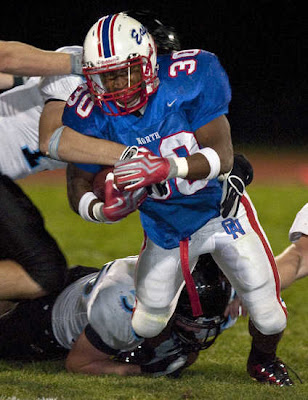 Franklin returned as a junior in 2008 and really blew up on the Kansas City high school football scene. He led a talented, but inconsistent Olathe North team to a 7-2 regular season and a Regional Round upset of an undefeated Olathe East team. Perhaps the Eagles were too confident heading into their Sectional Round game against Lawrence Free State, a team they had clobbered by 28 points earlier in the season. The game was ugly and Olathe North lost 10-6, marking the second year in a row the program had bowed out of the playoffs with a low point output. Franklin finished the year with 1,971 rushing yards and 22 touchdowns on 268 carries including five straight 200 plus rushing yard games to end the season. He was named First Team KC Metro Sports as a running back for his efforts.

Now fast forward to the beginning of the 2009 season. Franklin’s career rushing yardage sat at 3,113 yards, an achievable 2,117 yards behind the legendary Darren Sproles. Olathe North was being hailed in the preseason rankings as the top high school team in the Kansas City Metro, and Franklin was being recognized as the star of the team and a Simone Award hopeful. Fortunately for Franklin’s legacy, he lived up to the expectations.

Olathe North finished the 2009 regular season undefeated before running through the playoffs to face Blue Valley in 6A East Sub-State game. The Eagles played uncharacteristically, and Franklin didn’t score for the first time all season, but they survived and advanced to the state championship game against Wichita Heights. Franklin closed out his high school career with a rushing for 269 yards and three touchdowns in a dominant victory over Wichita Heights for the Kansas 6A crown.

During the season Franklin had broke the Olathe North single game rushing record (340 rushing yards in week four) and Darren Sproles’ all-time Olathe North rushing total (Franklin surpassed 5,230 rushing yards in week 11). Franklin finished his senior season with 2,803 rushing yards and 31 touchdowns. For his career he rushed for 5,916 yards and 69 touchdowns. Franklin was named First Team KC Metro Sports, All-State Class 6A, Kansas Top 11, and he was awarded the Simone Award, becoming the sixth Olathe North football player to receive the prestigious award. Franklin signed to play football at the University of Nebraska-Omaha.
Posted by Eli Underwood at 8:36 PM

Heard he was transfering to play elsewhere in fall of 2011...any idea?

He has to, UNO has completely shut down their football program. However, he has tons of offers from other schools. Don't know where he's going though. (Probably near Kansas still though.)