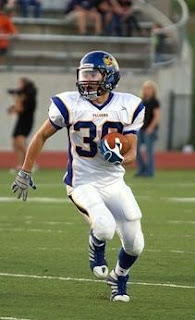 SM South (1-2) at Olathe South (1-2) (Thursday night game)
After a difficult two game stretch to begin the season Olathe South may finally be settling into their offense--which is a scary thought for the Raiders. SM South played poorly in their 28-7 loss at Lawrence last week, and while their offense should do better against the Falcons it's hard to say if they will be able to shut down Jake Crist (right), Nick Sands and the Olathe South running game. Olathe South's 396 rushing yards last week are a hint as to what the Falcon's approach may be in this game.

Leavenworth (0-3) at Olathe East (3-0)
Olathe East goes from playing a team with a 15-game winning streak in week three to playing Leavenworth, a team with an 18-game losing streak in week four. It's quite the change around in opponents. The only concern Olathe East could have going into this game is letting their guard down and not playing to their potential--regardless, this will be Olathe East's first game to prove themselves as the "top dog" in the Sunflower League.

SM West (2-1) at Olathe Northwest (2-1)
If I had to evaluate both of these school's performances this season I would say Olathe Northwest is playing at a consistently high level given their quality of talent, while SM West still hasn't put everything together for an entire four quarters. The Vikings appear to be the better team on paper, but another lackadaisical effort could prove costly this week against a motivated Olathe Northwest team.
Lawrence (2-1) at SM Northwest (0-3)
Will this be the week SM Northwest finally claims a victory? The Cougars are head and shoulders better than the two other winless teams in the league (Leavenworth and SM North) and they have a solid core of skill position seniors in Stephen Mangesldorf, Drew Goodger, and Kenny Mings. But, Lawrence is saying "not so fast my friend!" The Chesty Lions have looked impressive in their two wins and they are easily capable of sticking loss number four to the Cougars.
Lawrence Free State (2-1) at SM North (0-3)
This game could get ugly if the Indians don't come prepared to play some defense. Free State is operating the league's top ranked offensive at 397 yards and just under 40 points per game. SM North on other hand is giving up just under 34 points per game, and ranks second worst in the league in total defense. The past few seasons have shown us that it's hard to stop Free State's offense once it gets rolling, and it very well may on Friday. Kyle Goodburn and Kendall Kelly must step it up early for SM North if they have any chance in this one.
Game of the Week
SM East (3-0) at Olathe North (2-1)
Most didn't expect SM East to have more wins than Olathe North by the time of their week four meeting, but that's where we stand. SM East handled their first three opponents with ease, winning by a combined score of 99-37. Meanwhile, Olathe North is coming off their first loss in 16 games. Both teams have alot to play for, espcially SM East whose fanbase is amped at the prospects of knocking off the heavyweight Olathe North (a Facebook page has even been started to build up more hype for the game). A key matchup to watch? SM East leads the Sunflower League in passing at 239 yards per game, while Olathe North ranks second against the pass on defense and has only given up 10 completions. Whoever controls this aspect of the game could very well determine the winner.

Photo courtesy OSfootball.com
Posted by Eli Underwood at 10:52 AM

we need to step outside of our johnson county 'bubble' and fight for these kids. they deserve every opportunity that we have had. this makes me feel blessed growing up where we did. i cant imagine what that must feel like for those kids, they don't even get a chance to compete. there is so much young people can learn from athletics: teamwork, discipline, hard work and dedication. building blocks to a successful life beyond high school athletics. kansas city sure has let these innocent kids down and set them up for failure. yeah this isn't the only problem for these kids but it is one more they didn't need... this is a piece that jason whitlock shouldve written because he would have brought a lot more to the table than sam mellinger. this guy really sucks and should be taken out of our former award winning sports section.

Its great to be a Lancer!
GO EAST! BEAT O NORTH!

Note to self: Stop picking SMS to win football games! (2 of my 3 misses on the year). As to the other miss, Congrats to OE Hawks on a real statement win. They don't play SMW or SME so should be on their way to 9-0 and top seed again. Sadly it looks like deja vu all over again for SMW fans...maybe 8-1, a share of the conference championship, a two seed and a first round game against a hard charging losing record Blue Valley team (BVW this year) in the first round. I think I've seen this movie before!

SME (3-0) @ ON (2-1) Lancers begin a three game brutal road stretch. Can they match up with the Eagles? Can ON bounce off the deck after taking a shellacking from the Hawks? Can a SM school salvage some pride and beat an Olathe school this season? I think not here...ON 31 SME 21

SMS (1-2) @ OS (1-2) Falcons got off the snide last week with a squeaker against SMNW. This week they continue to get better against the Raiders...OS 38 SMS 7

LAW (2-1) @ SMNW (0-3) The hardest game to pick this week. Are the Lions for real? Their wins are over two of the three worst teams in the league, they move up to play what SHOULD be a middle of the pack SMNW team here but the Cougs inability to convert an extra point kept them winless last week. I still have to think NW is the better team here and playing at home they get their first win...SMNW 23 LAW 21

LFS (2-1) @ SMN (0-3) A crushing defeat for the Firebirds last week (by 1 point as I predicted) but they take their frustrations out this week against an Indian team that actually scored some points against the SME reserves last week....LFS 42 SMN 14

SMW (2-1) @ ONW (2-1) ONW's offense could not score against OE and only put up 35 on LV last week. They will struggle mightily with this Vike defense also. The Raven D could keep them close in the first half but in the end, West pulls away...SMW 17 ONW 7