Top 5 Player Ratings
Player ratings are subject to change on a week-to-week basis
1. Brandon Willingham, Running Back, Olathe East
Week Three: 28 carries, 188 yards, 3 TDs
Last week Willingham dropped two spots in the rankings, and I wrote that he could shoot back up the list with a big game against Olathe North. Needless to say, Willingham delivered. He scored on two touchdowns runs of two yards, and one of 40 yards which put the final nail in the coffin on Olathe North's win-streak. 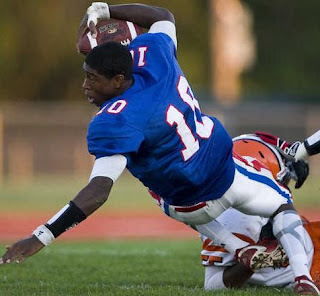 2. Victor Simmons (right), Quarterback, Olathe North
Week Three: 14 carries, 79 yards
For this first time in a long time, Simmons looked just ordinary in a football game. He only rushed for 79 yards and did little through the air. The bewildered look on Simmon's face at the right as he was tripped up captures his team's 25-0 loss to Olathe East perfectly. Regardless, Simmons could make amends this Friday if he has a big game against SM East.
3. Dylan Perry, Quarterback, Lawrence Free State
Week Three: 22 carries, 193 yards, 2 TDs; 10-of-17 passing, 185 yards, 1 TD
Perry continues to rack up big numbers and it's very impressive that he ranks second in the league in both rushing yards, and passing yards. Perry accounted for all three of Free State's touchdowns against SM West, and his 80-yard touchdown run in the second half could have sealed the deal on the game, but special teams mistakes proved costly for the Firebirds.
4. Adonis Saunders, Running Back, Olathe North
Week Three: 16 carries, 48 yards
Saunders, like Simmons, played much worse than what we're used to. By comparison, Saunders had runs in each of the first two games which gained more yardage on one carry than the total yardage he collected this past game. His 3 yard average per carry for the game may be the lowest we'll see from him all season.
5. Will Livingston, Running Back, SM West
Week Three: 16 carries, 65 yards, 1 TD
Among the top ten rushers in the league Livingston has the second lowest average yards per carry at 4.8, and he is only averaging 86 yards per game, but Livingston has kept SM West rolling despite Drew Humphreys' hand injury. Livingston has scored six of the Vikings 11 touchdowns, including a 20-yard run that pushed SM West to within six points of Free State on Friday.
Honorable Mention: John Schrock, Austin Fulson, Preston Schenck
Week Four Power Rankings
*Power Rankings are subject to change on a week-to-week basis
**See previous post for commentary on Power Rankings
1. Olathe East (3-0)
2. Olathe North (2-1)
3. SM West (2-1)
4. SM East (3-0)
5. Lawrence Free State (2-1)
6. Olathe South (1-2)
7. Olathe Northwest (2-1)
8. SM Northwest (0-3)
9. Lawrence (2-1)
10. SM South (1-2)
11. SM North (0-3)
12. Leavenworth (0-3)
Eli's Week Three Q and A
Submit your Sunflower League questions to Eli at eunder@ku.edu
Q: Can SM East make it two losses in a row for Olathe North?
A: Let's put it this way: so far SM East has shown they have the ability to compete with any team in the league, but Olathe North losing two weeks in a row is a tall order. Whether the shutout loss Olathe North suffered last week was a product of being overconfident (or Olathe East being that good) remains to be seen, but I can assure you the Eagles won't be overlooking or under preparing for this week's game against the Lancers. 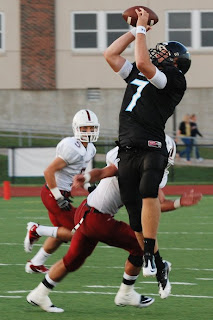 SM East (led by senior quarterback John Schrock, right) is going to get Olathe North's best effort, and visa-versa. The Lancers haven't had a spotlight game of this magnitude since they faced an undefeated SM West team in 2005. That game was the KC Metro Sports Game of the Week, and SM East's homecoming. The Lancers lost 17-7. Olathe North on the other hand is used to the big game attention, and it shouldn't affect their preparation or create early game jitters. It should also be noted that SM East was very competitive with Olathe North in the first half of last year's Regional playoff game, so the team's aren't completely unfamiliar with eachother.

This is the biggest game so far in the Chip Sherman era at SM East and the Lancers have a chance to make a big statement if they win. Likewise, Olathe North has a chance to erase any doubt from last week with a big win of their own.
Q: Have any statistics stuck out across the board this season?
A: Missed PATs and two point conversions. Through three weeks of play their have been 22 occasions where touchdowns were scored but the PATs or two point conversion were unsuccessful. As good as Olathe East looked in their win Friday, they still managed to botch three of their four PAT attempts. I guess it's just not the year of the kicker in the Sunflower League.
It's also noteworthy that through three games Lawrence Free State ranks atop the league in total offense at 397 yards per game, and total defense, only giving up 167 yards per game.
Stat Check
Passing Yards
John Schrock, SM East: 686, 5 TDs
Dylan Perry, Lawrence Free State: 392, 2 TDs
Stephen Mangelsdorf, SM Northwest: 359, 3 TDS
Brad Strauss, Lawrence: 328, 3 TDS
Armani Williams, SM West: 219, 2 TDs
Kyle Goodburn, SM North: 213, 1 TD
Alex Forslund, SM South: 205, 1 TD
Ryan Lundgren, Olathe Northwest: 203, 3 TDs
Trent Kuhl, Olathe East: 190, 1 TD
Corey Kipp, Olathe Northwest: 153, 3 TDs
Rushing Yards
Brandon Willingham, Olathe East: 438, 4 TDs
Dylan Perry, Lawrence Free State: 429, 5 TDs
Victor Simmons, Olathe North: 353, 2 TDs
Adonis Saunders, Olathe North: 332, 4 TDs 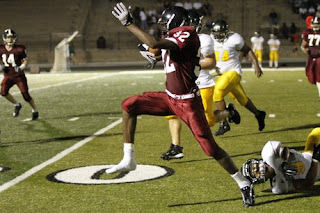 Why the hell is john schrock not on the top 5 players list?

Cause the 5 that are there are playing very well themselves.

Maybe he will be if East actually beats a worthy opponent.