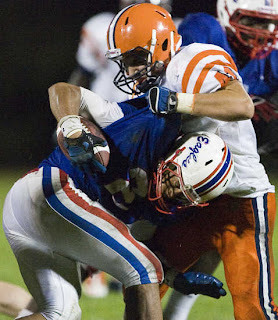 Olathe East
Not only did Olathe East (right) snap Olathe North's 15 game win-streak, but they also pitched a shutout and had no problems running the football straight at Olathe North.
Olathe South
Olathe South broke a five game losing-streak dating back to last season by rushing for some 392 yards Friday night. The transition to a run based offense appears to be taking hold.
Lawrence
The Chesty Lions played their best game of the last two seasons against SM South and they looked good across the board.
Three Down
Olathe North
It was hard to imagine Olathe North losing this season, especially by a 25-point margin. The fact that the loss came at the hands of their biggest rival just added salt to their wounds.
SM Northwest
The Cougars are 0-3 and have not showed much life this season. The team's remaining three games before district play aren't necessarily a cake walk either.
SM South
The Raiders' offense was absolutely brutal in their loss to Lawrence on Friday. Their 125 yards of total offense just won't cut it in the Sunflower League.
Individual Highlights

Week Four Power Rankings
1. Olathe East (3-0): For the first time since the inception of the Power Rankings a team not named Olathe North sits atop the list.
2. Olathe North (2-1): The Eagles can't be downtrodden this week--they play undefeated SM East on Friday.
3. SM West (2-1): The Viking's 21-20 comeback victory wasn't pretty but it was the type of gritty effort the team has lacked in losses over the past several years.
4. SM East (3-0): The Lancers are playing great football right now and they have a chance to prove their worth Friday against Olathe North.
5. Lawrence Free State (2-1): The Firebirds high powered offense didn't slow down Friday, but their special teams play was awful and it cost them the game.
6. Olathe South (1-2): The Falcon's offense looked great in their win but they will need to step things up defensively if they ever plan on contending in the Sunflower League.
7. Olathe Northwest (2-1): Olathe Northwest has been playing a quality brand of football this season, and it showed in their shutout win over Leavenworth.
8. SM Northwest (0-3): Despite another loss, the Cougars still have high hopes for the season--their district opponents have gone a combined 1-8.
9. Lawrence (2-1): Lawrence claimed a homecoming game victory and surpassed their 2009 win total.
10. SM South (1-2): The Raiders need to figure out their problems on the offensive side of the ball quickly before their Thursday night game against Olathe South.
11. SM North (0-3): SM North's losing streak has now reached the double digit mark at 10 games.
12. Leavenworth (0-3): Thus far Kevin Kopecky's presence and a new stadium have done little to lift the football program.