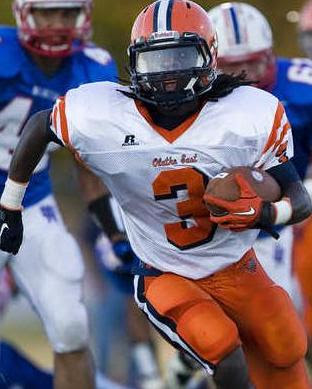 Olathe East 25, Olathe North 0
Olathe North's 15-game win streak came to a stop with a thump, courtesy of Brandon Willingham (right) and the Hawks from Olathe East. Willingham led Olathe East's charge, rushing for 188 yards and three touchdowns on 28 carries. Fellow running backs Austin Fulson and Treyshawn Root combined for another 89 yards and a touchdown. The reality of the Hawk's dominance set in in the third quarter, when they began an 18 play, 86-yard drive that was finalized with a Willingham touchdown run from two yards out. The loss was Olathe North's first since November of 2008.
Lawrence 28, SM South 7
A strong defensive effort from Lawrence helped the team collect their second win of the season, surpassing last season's one win campaign. The Chesty Lions smothered SM South's offense, holding the Raiders to a mere 95 yards of total offense. Lawrence's offensive production wasn't too shabby either--the team was led by Charles Jackson's 15 carries for 140 yards and a touchdown.
Olathe Northwest 35, Leavenworth 0
Olathe Northwest didn't skip a beat in Korey Kipp's first start as their quarterback on Friday. The junior passed for 78 yards and three touchdowns on seven completions. Olathe Northwest's Nick Bandy also had a solid game, recording two interceptions, a rushing touchdown, and 101 yards of total offense in the first half before he left the game with a minor injury.
SM East 40, SM North 21
SM East wasted no time setting the tone they wanted on Thursday scoring rushing touchdowns on their first four possessions. Running back Adam Lowe contributed two of the touchdowns on runs of 25 and 48 yards. The flow of the game didn't change much in the second half as John Schrock found Elliot Faerber on a 54-yard touchdown pass off a deflection, and Robby Moriarty added a two-yard touchdown run to build a 40-0 Lancer advantage in the third quarter. SM North was able to add late scores on two touchdown runs from Kendall Kelly, and a touchdown pass from Kyle Goodburn to Mason Perez. 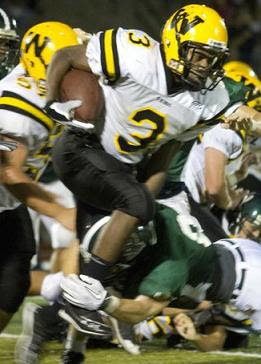 SM West 21, Lawrence Free State 20
Despite what appeared to be a Lawrence Free State domination on paper, SM West was able to snag a victory on the Firebirds' home turf. The only score of the first half came on a 42-yard pass from Dylan Perry to Cody Schmidt. Leading 7-0, the Firebirds tacked on another score in the third quarter when Perry capped off a Free State drive with a 20-yard touchdown run. The ensuing extra point was missed, which proved to be huge late in the game. A botched punt allowed SM West to get on board quickly with a 14-yard touchdown run from Tre Burt. Perry then scored on an 80-yard run to give Free State a 20-7 advantage. SM West drove and scored their second touchdown on a 20-yard run from Will Livingston (right). Free State's next possession stalled, and their punt was blocked by a SM West defender. The Viking's Bryan Meeker scored on a one-yard touchdown run that proved to be the game winner.

Olathe South 27, SM Northwest 25
Olathe South's power-running game finally showed signs of life Friday, as the Falcons grinded out 392 rushing yards and four touchdowns on 60 carries for the win. The two teams traded scores all night. Olathe South started with a 5-yard touchdown run from Kendal Harland, before SM Northwest responded with a 25-yard touchdown pass from Stephen Mangelsdorf to Kenny Mings. Olathe South touchdown runs from Nick Sands, Jake Crist, and Harland were answered by touchdowns runs from Mings, Mangelsdorf, and then another Mangelsdorf to Mings touchdown pass, this time from 49 yards out with 3:10 to go in the fourth quarter. That score put SM Northwest within two points of tying Olathe South, but the Cougar's two-point conversion failed, as they fell to 0-3 on the season.
Photos courtesy (from top) the Kansas City Star, the Lawrence Journal-World
Posted by Eli Underwood at 3:40 PM

for SM East its Grant Ellis and Elliot Faerber... North put all their points on what was basically the East sophmore team otherwise it was a 40-0 win. GO EAST! BEAT O. NORTH!... like the blog, even if you did go to West.