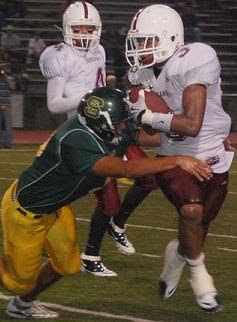 Week Three Matchups
All game times 7 p.m. unless otherwise noted
SM North (0-2) at SM East (2-0) (Thursday night game)
At this point in time last season SM North was riding high at 2-0, and SM East was searching for any signs of life at 0-2. SM North went on to lose seven straight games (their current losing streak sits at nine games), while SM East went 0-3 before turning things around to make the playoffs. The circumstances of both teams are much different this season, but the Nut Cup rivalry between these two foes still comes with bragging rights. SM North's Kendall Kelly (right) needs to have a big time game for the Indians to win.
SM West (1-1) at Lawrence Free State (2-0)
The interest in this game has really picked up due to Lawrence Free State's strong start to the season. The Firebirds have been nearly unstoppable with their scoring, and they are leading the league at 45.5 points per game. The Firebirds have also benefited from playing two of the poorest defensive units in league. SM West on the other hand will be playing better defense and fighting hard to collect the win--a loss would be the worst start for the Vikings in seven years.
Olathe South (0-2) at SM Northwest (0-2)
Neither of these two have started the season the way they thought they would, and the crazy thing is that one will be 0-3 when this game is over. Olathe South has had serious issues with their defense, and SM Northwest's offense has been lifeless through two weeks. Something has got to give--and that may very well decide the winner.
SM South (1-1) at Lawrence (1-1)
These two clubs look pretty evenly matched on paper. SM South ranks seventh in the league in total offense while Lawrence ranks eighth. Lawrence ranks seventh in the league in total defense while SM South ranks eighth. With a game like this it's hard to see an edge either way and it should make for an great game.
Olathe Northwest (1-1) at Leavenworth (0-2)
Is it Olathe Northwest's turn to take out some frustration on Leavenworth? Last week the Ravens played well against Olathe East but several breakdowns left them with a 14 point loss. This game is especially key for Olathe Northwest because it will probably be the last time this season in which they are heavy favorites to collect a victory. Their schedule gets very tough after this week three game.
Game of the Week
Olathe East (2-0) at Olathe North (2-0)
The last time Olathe East beat Olathe North was week one of the 2008 season. Since then the Eagles have gone 2-0 in the series and clearly established themselves as the dominant Olathe football school. Olathe East could make a strong push to regain that title if they can pull off a victory Friday night at ODAC. Adonis Saunders and Victor Simmons have basically run free through two weeks of play, because quite honestly no team has had the speed to match either player. Olathe East's secondary may challenge that notion this week. Led by Austin Fulson, Brandon Willingham, and Junior Williams, the Hawks possess nearly as much speed as the Eagles themselves.

Yes, I know what you're thinking: If TheImpaler already knows how all the games are going to end, why bother to play them? Well, what else would the bands do all fall?! Seriously though, the picking gets harder this week with 4 of the top 5 teams playing each other in what is probably the most important week outside of districts:

SMN (0-2) @ SME (2-0) One of only two easy to pick games this week. One wonders if the soft early schedule may hurt the Lancers in the next three weeks where they have brutal road games. Still an easy time Thursday night...SME 40 SMN 6

LV (0-2) @ ONW (1-1) The other obvious game. The Ravens were exposed by OE last week as still not quite ready to join the league's elite, probably headed for a middle of the pack finish. No prob with the Pioneers though...ONW 50 LV 14

OE (2-0) @ ON (2-0) This is for the city championship of Olathe if not the Sunflower League (and possibly the state). Eagles did not score as freely against OS' porous defense as I expected but Hawks have not seen anyone close to ON's athleticism so far this year. ON 30 OE 21

OS (0-2) @ SMNW (0-2) Which team can find motivation to start turning the season around? Falcon Football is not a happy place right now and honestly other than Kenny Mings, most of the Cougs looked like they would rather have been any place other than playing football Saturday. In fact, I think cardboard cutouts of the O lineman could have done as well as the actual line. Whichever coach can find some mojo here will win this game. I guess I'll go with what SHOULD be a more talented OS squad in a sloppy game....OS 17 SMNW 16

SMS (1-1) @ LAW (1-1) Each team has had one good week and one bad one. The winner here takes a giant step back towards respectability. I'm going out on a limb and taking the Raiders on the road...SMS 23 LAW 16

SMW (1-1) @ LFS (2-0) The Firebird offensive juggernaut against the stonewall Viking defense should be a great show. The difference here may be West's improving offense. Coach C, being a genius, spent the second half Saturday working on weapons other than Will Livington's Darren Harvey-esque running. Burners Deandre Graves and Cordi Pascal both look like serious downfield threats and Armani Williams has been right on target, if his receivers can just pull in the balls that hit them in the hands. Add in a couple of nice catch-and-rumbles from FB Danny Dowling and West is starting to look scary. In the end West's senior leadership pulls out a close game...SMW 28 LFS 27