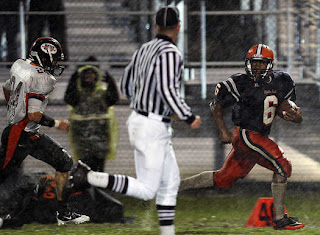 Olathe East (10-1) at Olathe North (10-1)
When: 7 p.m., Friday
Where: ODAC
CJ-Online Spread: Olathe North by 4.4 points
Players to Watch
Olathe East
The Hawks will be getting the majority of their offensive production from their two running backs, Brandon Willingham (1,658 yards rushing, 22 TDs) and Austin Fulson (855 rushing yards, 13 TDs). The team has relied heavily on the offensive production of those two as well as stellar defensive play to get to the Sub-State round. Willingham and Fulson (above) also headline the defense along with leading tackler Vince Gerstner (86 tackles) and defensive back Junior Williams whose two interceptions helped to shut down SM Northwest last Friday.
Olathe North
You would be hard-pressed to find a faster and more athletic quarterback/running back combo than Olathe North's Victor Simmons and Adonis Saunders. The two Kansas commits have combined to rush for 2,734 yards and 28 touchdowns on the season. The emergence of receiver Tanner Gentry at the tail end of the season has given the Eagles a big play threat through the air, and that added dimension has made Olathe North even more difficult to defend. On the defensive side of the ball Kyle Swartz has been a menace, collecting over 100 tackles and consistently making big plays whenever Olathe North seems to need them.
What to Expect
Everyone remembers the week three matchup between these two and how Olathe East manhandled Olathe North 25-0. Nine weeks have passed since that game and both teams appear much improved.
For Olathe North, this game will be all about revenge. The early season loss broke Olathe North's 15-game winning streak and served as a piece of humble pie for the defending state champs. Since that game Olathe North has gone 8-0 and outscored their opponents 310-79.
For Olathe East it's been a different story. The Hawks won their week four game, but then lost a stunner to Lawrence, 27-21, in week five. The team was forced to make comebacks against Blue Valley West in week seven and Lawrence Free State in Regionals. While their record matches that of Olathe North, Olathe East certainly hasn't played as dominantly since the last time the two squads faced off.
This game is really going to come down to the type of attitude each team brings to the table. If Olathe North gets too caught up in trying to avenge their earlier loss they may end up hurting their own performance. The Eagles are a talented group--but their play has yet to match that of the level they performed at last season, and last year's group nearly lost in the Sub-State round to Blue Valley. If this group of Eagles doesn't stay focused on what they themselves can control in the game they may find themselves doing the unthinkable and losing to Olathe East twice in the same season.
Olathe East could use a "walk quietly but carry a big stick" mentality in this game. Sure, the Hawks stuck it to an overconfident Olathe North team in week three, but that was nine weeks ago. Olathe North has been on fire ever since while Olathe East has shown significant struggles, most recognizable by having to make combacks in several wins, and losing a game. The computer spread is picking Olathe North in this game and the Eagles' can almost taste consecutive state titles. If Olathe East at all feels like they will have as easy of a victory as they did in week three they will be in for a big surprise. The Hawks best option for success in this game will be sticking with their bread and butter--solid run production and great defense--and establishing themselves early.
This game lacks a true underdog like we've seen in recent years but make no mistake, this should be a great one. The two clubs have a combined record of 20-2 this season (and one of those losses was Olathe North's in the head-to-head game), and you could make the case that these were the two fastest and most athletic units in the Sunflower League this season. Both Olathe North's Pete Flood and Olathe East's Jeff Meyers have made it to this round in the past, and advanced, so both sides are familiar with what it takes to win this game.
In a game that seems so close on paper alot of things can happen to swing the momentum and eventually the victory in the way of one team. The most common determining fators in the winners of big games are big plays, and turnovers. You could bet the team that does the most of the former, and the fewest of the latter will be successful. But who knows? We never saw that 25-0 shutout coming earlier this season.
Photo courtesy the Kansas City Star
Posted by Eli Underwood at 10:13 PM

OE(10-1) @ ON(10-1) Gaarrrggghhh....an OE v. ON semifinal? From a SM fan's perspective could anything be worse? If we can't get any SM teams in at least it could be like OS v. LFS. Still from a football fan's perspective, you have to admit (even if you're Clayton) that the two best teams made it. Competitively this may be the best semi-final since the '06 battle of 11-0 SMW v. 11-0 LFS.

An odd game, if you look only at comparative scores and recent results, there is simply no question that the Eagles are the better team. Then there's that one glaring fact that the Hawks spanked North just a few weeks ago 25-0. How did that happen? Well, North relies almost exclusively on the run with Saunders and Simmons but you simply cannot run on East's defense which may well be the best run defense in the SL since that 2006 Vike D, maybe even better than that. North could only manage 72 total yards against a Falcon D that is nowhere near this good. On the other hand East's offense has been sorely lacking in recent weeks. I think Saunders v. Fulson and Willingham will be a draw and this game will come down to quarterback play. If Simmons can make the big runs, North wins, If Kuhl can get anything going through the air to open things up for the RB duo, then the Hawks will go to Topeka. This will be a hard fought, down and dirty, hit you in the mouth kind of game. As much as it pains this Viking fan to pick them, I've got to go with East to advance to Topeka...OE 17 ON 13

My only consolation is that I'm fairly confident that Dodge City will go on the road and crush Heights tomorrow and will cruise over either Olathe team in the finals. I think the Red Demons are head and shoulders the best team in the state right now.

That is very true very hard to look at these olathe teams and pick who is better...The eagles have been playin some goood football while east has been shaky maybe if they can get back to old ways we can have ourself a ball game, that 25-0 game is what makes this game hard to choose right now

I will have to agree east defense has been spectacular but if you come back to last week the cougars had been in the bottom of running and they allow this back his first 100 yard game all season so who knows, i feel as east doesnt come together as a unit and that eagle team has a few people who been there before...east goes out and thinks there gonna roll and thats there downfall

Olathe North will win. Olathe East can never seem to pull it together and win the big game when everything is on the line.

I hope they both lose

Same old story, when play off time comes, the Eagles rise. Once again, the hawks loaded with talent fold in the playoffs, Jeff Meyer couldn't be competitive in the playoffs if he had Payton Manning at QB. There was no doubt that North would win. Moving on to Heights, they aren't as good as their record indicates, they play a wek, weak schedule with the Wichita teams compared with the Sunflower.