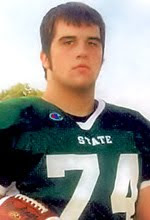 The head coach’s son is always going to have added pressure to perform and often times that can hurt a player’s performance. If Michael Lisher felt pressure as the head coach’s son, he sure didn’t show it. The surprisingly agile Lisher was the key foundation block for the Lawrence Free State Firebirds’ offensive line in his junior and senior seasons.

During the offseason many questions arose about the Free State program. The pundits wondered whether the miracle run to the title in the previous year had been more an act of luck than anything. The program had lost arguably its best running back in school history (Hunter) to graduation and there didn’t appear to be a clear replacement.

Despite all this, Lisher and the rest of the team looked hardly any different in 2009. In fact, from a run game standpoint the team was much improved, a credit to Lisher and the rest of the offensive line. Free State rushed for 2,542 yards in 11 games during the season. That averaged out to 231 rushing yards per contest, much of which could be credited to Lisher’s efforts. Lisher also developed quite a name on the defensive line, becoming a force to be reckoned with on both sides of the ball. Free State went 8-3 in 2009, advancing as far as the Sectional round of the playoffs.