After 28 long weeks my roster of the Sunflower League's best over the past decade is finally complete. Here are is a breakdown of the team:

*All 28 players on the team were named All-State as seniors. 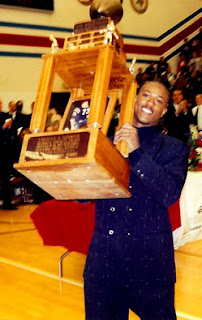 So that formally concludes the list. I would like to say that there were dozens of players who were deserving of making this list that didn't. At many positions the final spot came down to two or three players. The decision making process wasn't easy, but I felt like in the end the best players truly did make the list.

Now to the rest of the summer. During the next three months I will be posting write-ups about the best returning players in the Sunflower League for 2010, as well as covering league related news, releasing my preseason rankings, and a boatload of other topics.

As the sole writer of this blog it is important that I am always coming up with new ideas and topics to cover. I am asking of you, the readers, to send any suggestions you have for the blog to me via email (eunder@ku.edu). These suggestions can be related to summer topics, season coverage, and anything and everything in between. It is the best way for me to improve on the blog, so please, don't be shy.
Posted by Eli Underwood at 7:49 PM