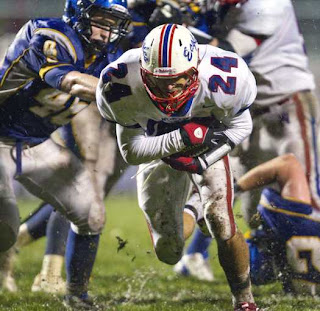 Olathe East 14, SM Northwest 7
For the second week in a row Olathe East failed to score any first half points. Fortunately for the Hawks, SM Northwest's offense was equally as unproductive and the teams went into the half tied at 0. In the third quarter the stalemate finally broke. SM Northwest quarterback Stephen Mangelsdorf was intercepted by Olathe East's Junior Williams who returned the interception to the SM Northwest 12-yard line. Several plays later Brandon Willingham was able to punch in a score from a yard out. The touchdown put Olathe East up 7-0. SM Northwest responded with a touchdown of their own. Mangelsdorf found James Gregory on a 15-yard touchdown pass to even the score. In the fourth quarter Olathe East's Austin Fulson made perhaps the biggest play of his career, breaking lose on a run and going 89 yards for a touchdown. The score came with just over nine minutes remaining in the fourth, but Olathe East was able to ride the 14-7 lead to the finish.
Olathe North 17, Olathe South 0
Had we known Olathe North would be held to a mere 72 yards of total offense before this game began it seems logical that Olathe South would have come out victorious. Olathe South's costly turnovers and poor field position, however, proved to be their downfall in the end. Olathe North struck first when they started their third drive on the Olathe South 27-yard line. Following a few run plays and a fortunate bounce on a fumble by Adonis Saunders, Dominick Wilson (above) gave Olathe North the lead on a one-yard touchdown run. The 7-0 lead held through halftime. Midway through the third quarter Olathe South botched a shotgun snap, and Olathe North recovered the ball at the Olathe South seven-yard line. Olathe South's defense held, but Olathe North's Daniel Gutierrez connected on a 21-yard field goal to put Olathe North up 10-0. The Eagle's final score came in the fourth quarter when Kyle Swartz intercepted an Olathe South pass, and then several plays later punched the ball in on a one-yard touchdown run.
Photo courtesy the Kansas City Star
Posted by Eli Underwood at 4:57 PM

Thank you for the tremendous job you do covering the Sunflower league. What an impressive defensive showing Olathe South had on Friday. Best of luck to both of the remaining Olathe teams, lets all root for the "Eastern Side" going forward to the state championship.

Though I'm of course rooting for ON, Olathe East might be one of the teams I respect the most. Both schools have really earned the spot they're at right now.

O East is good, no doubt. But respect is a hard thing to give them. That team could be dominant--absolutely dominant if they even had half as much work ethic as much of the league does. As a player, I know first hand that they don't work as a cohesive unit and play for each other like many other teams do. But they are an immensely talented team nonetheless, and you have to give props for that. Whoever wins this sub-state game will be deserving.

Just to clarify, I am not a player for Olathe East. Sorry if that was confusing.