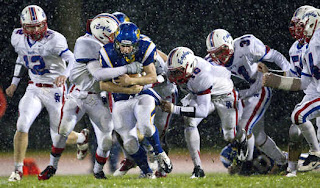 **Olathe East and Olathe North (right)--the two prohibitive favorites throughout the season--will be meeting in the Sub-State round for the opportunity to advance to the state championship.
**The last time Olathe East and Olathe North met in the Sub-State round was in 2002. That game proved to be one of the best of the 2000s, with Olathe North claiming victory, 12-10, after Olathe East botched a last second field goal attempt.
The Bad
**The heavy winds and rain played more of a role on Friday than what most people wanted to see in a playoff games. While football is a game to be played in the elements, there's a reason all major BCS games (and usually the Super Bowl) are played in locations with favorable weather.
The Ugly
**Olathe North and Olathe South combined for 160 yards of total offense on Friday. By comparison, during the regular season the two teams combined to average 737 yards of total offense per game.
**ODAC. The playing field was ripped to shreds during Friday night's game and it won't be the most favorable playing surface come this Friday.
Individual Highlights
**Olathe South running back Nick Sands surpassed 1,500 rushing yards on the season after recording 108 yards on 29 carries.

**SM Northwest's James Gregory played possibly the game of his career Friday (given the situation), recording 101 rushing yards on 25 carries, and catching a 14-yard touchdown pass.
The Remaining Four
Olathe East (10-1): The Hawks handled Olathe North 25-0 in week three, but beating a good team twice is never an easy thing to do.
Olathe North (10-1): The Eagles can gain revenge on their rival and punch a ticket to the their tenth state championship game with a win Friday.
West Kansas 6A
In a battle of unbeatens, Wichita Heights (11-0) is hosting Dodge City (11-0) for a trip to the title game. Wichita Heights is coming off a 18-15 victory over Junction City, while Dodge City defeated Manhattan 41-20 this past week.

Photo courtesy the Kansas City Star
Posted by Eli Underwood at 10:58 AM