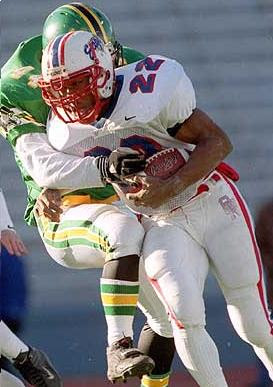 If two is good, then three is better—at least in the eyes of the Olathe North faithful. The third member of the three year Simone run at Olathe North was running back Jim Bouknight. Bouknight came as the biggest surprise of the three. Despite his obvious skill set, Bouknight never fully displayed his athletic potential to the masses until his senior year of high school when he took over at the running back position.

Bouknight had been an understudy of Darren Sproles and Maurice Mack. Following the lead of those two, it’s no wonder Bouknight knew what to do under the Friday night lights when he earned his opportunity. In his second true varsity start of the 2002 season, Bouknight scored two touchdowns on runs of 80 and 3 yards. He went on to rattle off 14 total touchdowns in Olathe North’s 5-0 start. The sixth game of the season proved to be a special one for Bouknight.

In a rivalry game against Olathe East, Bouknight rushed for 330 yards—a number that at that point in time was the Olathe North rushing record—and three touchdowns. From then on, Olathe North rolled to a 13-0 record, and won the 6A State Championship in a 41-12 trouncing of Derby. Bouknight’s season totals were simply amazing. He rushed for 2,793 yards (the Olathe North record at the time) and scored 34 touchdowns.

For his efforts, Bouknight was named First Team All-Class 6A, Kansas Top 11, and First-Team All-Metro Sports at the running back position. Bouknight received an even greater honor when he was awarded the Simone Award, becoming the third straight Olathe North running back to receive the award. Most notably he beat out one of the most hyped high school football players in the Kansas City Metro’s history, Rockhurst’s Tony Temple.

Bouknight did not have the size or speed of Sproles or Mack, but outdid both in terms of yardage as a senior. Bouknight went on to enjoy a successful career as a running back at Central Missouri.
Posted by Eli Underwood at 12:59 PM

I think that is a very accurate selection along with the rest of your list so far.

Gee, i bet the third RB will be James Franklin.

hm...all three won the Simone...would it really be that far-fetched?

Im a measure of mole compass

this really isn't an all sunflower league team, its more of an "all-olathe North, south and east team".

Before you jump to that conclusion it's important to consider several things:

3.) I'm a SM West grad...if anything I would be more inclined to slant the Olathe schools. This list is based on extensive research and first hand accounts. I had to bump the team to 28 slots to accomodate everyone who I felt deserved a position on the team.

Thanks for posting, and trust me, this is a fair and accurate list as you will see upon its completion.

LMFAO you said hint hint and thne put another Olathe player on the list.

Wow you said hint hint and then put another olathe player onthe list...that is awesome