Simmons gets the promotion to the #1 spot after another stellar game. The Kansas commit highlighted his team's 30-7 victory with a 80-yard touchdown run in the second half of the game. Simmons also had the best passing day of his career, and we should see more of it down the road.

Saunders broke loose for another long run on Olathe North's first offensive play of the game--this time it was a 79-yarder . The run marks the third touchdown run of over 70 yards that Saunders has had this season. It would be interesting to see if Saunders or Simmons is faster in pads. 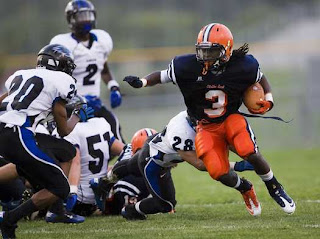 Willingham slips two spots mostly due to the emergence of fellow running back Austin Fulson. In this weekend's game it was Fulson who scored all three of Olathe East's touchdowns, and Willingham's average of 3.9 yards per carry was below what we've come to expect from the talented senior. A big game in week three against Olathe North could shoot Willingham back up the list.

Livingston has become the go-to-man for SM West. He recorded his fourth and fifth touchdowns of the season against SM Northwest--one of which came on a 60-yard touchdown run in the first quarter. His rushing totals aren't great (97.5 yards rushing per game) but his scoring production is.

Perry scored four touchdowns in a whirlwind victory over Leavenworth. Perhaps the most impressive of the four was when Free State's Preston Schenck (who is knocking at the door of the Top 5 Player Ratings) blocked a Leavenworth field goal attempt and Perry scooped the fumble up and took it back 91 yards for a Free State touchdown.

Eli's Week Three Q and A
Submit your Sunflower League questions to Eli at eunder@ku.edu

Q: Which team(s) has been the most surprising thus far, good or bad?

A: If you were to have asked me three weeks ago if I thought Olathe South and SM Northwest would be battling it out for their first wins of the season in week three, I would have said no way. Yet, in week three both teams are on their heels looking for their first "W." That's b

Lawrence Free State has also been a surprise. The team has literally not missed a beat at the quarterback position from last year. Dylan Perry's successes have been very impressive so far, especially for a first year starter at the position. Preston Schenck (right) has also been a huge surprise--probably not to the Free State faithful, but to the rest of us.

A: It's way too early to decide that, but I feel the Lancers have alot of things going for them that would point to an eventual yes. First off, SM East's head coach Chip Sherman is one of the best in the business, and you can never question a guy who has three state championship rings. Their strong start is much the product of the productive offseason Sherman put the team through. The Lancer's quarterback John Schrock looks like the real deal, and the team seems to be feeding off his playmaking ability. It's not a stretch to call Schrock the best passing quarterback in the league. The Lancer fanbase is also getting excited about the team, and I can't stress how much good a strong fanbase does for a program.

SM East should take care of SM North in the Nut Bowl in week three, and be 3-0 when they travel to take on Olathe North. That game, and the week after when SM East travels to play Lawrence Free State will be good measuring sticks for where the program is at.

A: This is a tough one. Leavenworth plays a home game against Wyandotte (currently 0-2) in week seven, and I'll make the bold prediction that the Pioneers will end their losing streak that night, if they haven't already. Olathe North has two games that appear to pose a decent threat, as of right now in week three. Their home game this week against Olathe East won't be easy, and their week eight contest with Lawrence Free state should be a challenge. 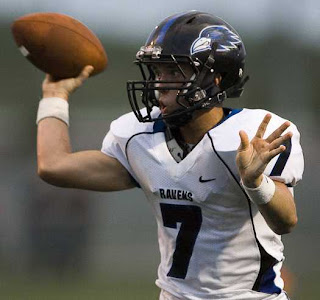 Posted by Eli Underwood at 4:30 PM