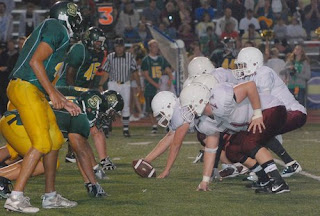 SM South
The Raiders (right, in green) used a solid ground attack and good defense to soundly beat SM North, 19-3. While it wasn't the flashiest victory we've seen so far, it was a solid outing and SM South took care of business.
SM West
The Vikings snapped their two game losing streak dating back to last season. Their jumping out to a substantial lead against SM Northwest was a big improvement over their lackadaisical start last week.
Lawrence Free State
The Firebirds hung 55 points on Leavenworth and further illustrated their big play potential on all sides of the ball. In the first half alone they had three special teams touchdowns of over 40 yards.
Three Down
SM Northwest
Going 0-2 to start the season is bad enough, but adding in the fact that the losses came at the hands of two other Shawnee Mission schools adds a little salt to the wound.
Olathe South
So far, Olathe South's transformation to smash mouth football has been, well, a bust. The Falcons have played a difficult two game stretch, but they haven't exactly been competitive in either game.
SM North
Through two weeks of play the Indians have scored a mere 10 points. Even Leavenworth has topped that with 13 points of their own.
Individual Highlights
**Lawrence Free State's Preston Schenck had yet another incredible game this weekend. The senior ran the ball 13 times for 84 yards, returned a punt 44 yards for a touchdown, returned a kickoff 94 yards for a touchdown, ran back an interception 40 yards for a touchdown, and blocked a kick which set up teammate Dylan Perry for a 91-yard return for a touchdown. 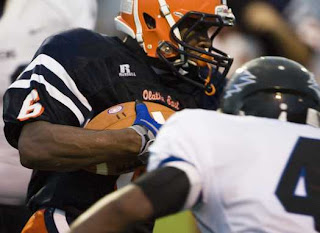 **Olathe East's Austin Fulson (right) ran the ball 15 times for 156 yards, including touchdowns runs of 80, one, and six yards. On defense he recorded eight tackles and a sack.
**Olathe North's Victor Simmons proved nearly unstoppable this past weekend, rushing for 163 yards and a touchdown on 21 carries, and completing four passes for 85 yards.
**SM East's John Schrock completed 19 of 28 passes for 385 yards and four touchdowns.

Week Three Power Rankings
1. Olathe North (2-0): The Eagles may be the fastest team in the state of Kansas, and their 347.5 yards rushing per game doesn't look to be going down anytime soon.
2. Olathe East (2-0): Olathe East's running back duo of Brandon Willingham and Austin Fulson is going to be a nightmare for defenses all season.
3. SM West (1-1): The Vikings appear to have regained their composure with their 24 point win after a poor showing in week one.
4. SM East (2-0): The Lancers are playing as well as anyone, and they have passed for 270 more yards than any other team in the league.

5. Lawrence Free State (2-0): Preston Schenck and Dylan Perry have come out of the woodwork as seniors, and their play has the Firebirds dominating.

6. Olathe South (0-2): There are many questions and few answers right now in the Olathe South camp; their defense has given up a league worst 448.5 yards per game thus far.
7. SM Northwest (0-2): The Cougars play the aforementioned Olathe South in week three in a desperate battle for a much-needed victory for both sides.
8. Olathe Northwest (1-1): Despite losing, Olathe Northwest had a decent showing against Olathe East and the Raven's appear to be headed in the right direction.
9. Lawrence (1-1): The Chesty Lions played well early, but couldn't hold their lead against SM East's potent offensive attack.
10. SM South (1-1): With this early win SM South is in good position to do better than the 3-6 record from last season.
11. SM North (0-2): SM North's offense has been terrible this season and it must improve if the team wants to collect any victories in 2010.

12. Leavenworth (0-2): The Pioneers had some flashes of life on offense, but unfortunately for Leavenworth it wasn't enough to win, and their losing streak now sits at 17 straight games.

Posted by Eli Underwood at 8:59 AM