SM South 19, SM North 3
Following a defensive stop and punt on SM North's opening possession, SM South was given a short field to score. Seven plays and thirty-four yards later the Raiders gained a 6-0 lead on a Gabe Guild touchdown run from two yards out. Midway through the second quarter SM South punched in another short touchdown run, this time a six yarder by Keaton Ward, to claim a 12-0 advantage. Kyle Goodburn gave the Indians their only points of the game on a 27-yard field goal before the half. SM South's Alex Forslund kept the ball on 35-yard option run to give the Raiders their third touchdown of the game in the second half.
Olathe North 30, Olathe South 7
Adonis Saunders clearly has a knack for taking the wind out of opponents early. On the second play of Friday's game Saunders took a handoff 79 yards for a touchdown. On Olathe North's ensuing possession Dominick Wilson scored on a run from 20 yards out to give the Eagles a 13-0 advantage. A Daniel Gutierrez field goal gave them a 16-0 lead minutes before halftime, when lightning halted the game until Saturday. The teams returned to the field Saturday and the game continued in Olathe North's favor. Saunders added a three yard touchdown run and Victor Simmons scored on an 80-yard burst in the second half. Olathe South's lone score came on a 64-yard run by Jake Crist.
Olathe East 21, Olathe Northwest 7
Capitalizing on a botched punt return by Olathe East, Olathe Northwest was able to jump out to a 7-0 lead early in the second quarter when Ryan Lundgren connected with Nick Bandy on a 14-yard touchdown pass. Olathe East responded on their next possession whe 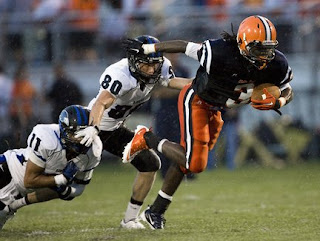 SM West 37, SM Northwest 13
SM West didn't take three and a half quarters to get things going this week. In the first quarter Will Livingston ripped off a 60-yard touchdown run for the Vikings for give the team a 7-0 advantage. Later in the second quarter Armani Williams connected with fullback Danny Dowling for a 22-yard touchdown pass. The bad weather hit, and SM West took a two touchdown lead to Saturday. The game stayed in SM West's favor on Saturday as well, as the Vikings added three touchdowns and a field goal. SM Northwest was able to add 13 points of their own, but it wasn't enough to overcome the initial deficit.
SM East 35, Lawrence 16
SM East got going early again on a play by Quan Brunt when he returned the opening kickoff 98 yards for a touchdown. Lawrence responded with a 25-yard field goal by Anthony Rosen and then Aaron Gile picked off a John Schrock pass and returned it 48 yards for a touchdown. The score put Lawrence up 9-7, but SM East quickly responded with two quick scoring drives, both of which ended with touchdown passes from Schrock. Before lightning stopped the game the Lancers led 21-9. On Saturday SM East took complete control and didn't look back. Schrock torched the Chesty Lion's defense for some 389 yards passing in leading the Lancers to the 19-point victory.
Lawrence Free State 55, Leavenworth 7
The Firebirds from Free State had no trouble scoring on Friday, or Saturday. Before the game was halted on Friday night, Free State had a gained a 27-7 lead. The four Free State touchdowns came on a 44-yard punter return by Preston Schenck, a 91-yard blocked kick return by Dylan Perry, a one-yard Schenck run, and finally a 94-yard kick return by Schenck. Leavenworth's Mark DaBeck connected with Jason Randall on a 64-yard touchdown pass to put their team on the board before the lightning hit. On Saturday the results were much the same as Free State tacked on four more touchdowns.