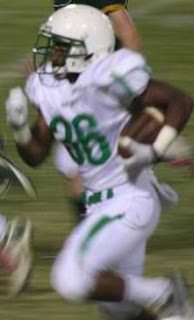 Mooney was a First-Team All-Desert Region selection last season as a running back at St. Mary's High School in Phoenix, Arizona.
Scouting Report
The only thing more mysterious than the arrival of the ballyhooed Mooney is the lack of press-clippings and statistical coverage from what seemed to be an impressive junior season at St. Mary's.  What we do know is that Mooney has generated quite the buzz around the league since his arrival, and he could be the next big name in a great line of Olathe North running backs.


On Mooney's gamefilm he possesses tremendous speed, vision, and fluidity with the ball in his hands.  On quite a few occasions he took snaps out of the Wildcat formation, which would make him perfectly suited for Olathe North's offense.  Two years ago James Franklin was unstoppable out of the Wildcat formation for the Eagles, and he ended up rushing for 2,500+ yards and winning the Simone, on top of leading the school to state title.  Not to say Mooney will even make half the impact that Franklin did, but the fact that he is familiar with the Wildcat formation should only help with his transition.
The last big name transfer into the league was Brett Ginn, who transferred to SM West in 2006 to play running back and linebacker.  Ginn had been an All-District performer at Timberview High School, in Mansfield, Texas, prior to his arrival at SM West.  We never saw his full contributions in the league as he tore his ACL in the third game of the Viking's season and didn't play again.
What kind of impact will Mooney have?  It's hard to say, but he is going to a school that has had quite the successful history of running backs, and if he can perform in the Sunflower League anything like the way he does on his gamefilm, watch out.
Posted by Eli Underwood at 7:11 PM

6.4 seconds. Looks can be decieving.

The kid is a cancer.... and that is per several North players that I have spoken with recently.... They are saying that he is already on Floods bad side....

My bet is that Root will be more effective...

....man im gettin pretty tired of you stop sayin hes a cancer jack ass you havent talked to any north players, he isn't on anyones bad side

If he is a cancer, back it up with facts.

Just going off of a conversation with 2 ON Varsity starters (this year). Said he is lazy and is not real consistent in the weight room... Said the coaches are very frustrated with his dedication... in other words, he is a Cancer....

From what I saw he seems to get along well with the coaches.

I heard his favorite color isnt even orange. Its blue. Weird.

Well, see I went out to dinner with Flood, Mooney, and Darren Sproles, and they all got up and hugged each other and played kumbya and cried till the sun came up.

See how easy it is to make stuff up? Sproles wasn't even really there!

And which 2 Varsity players said that?

First of all I'm technically a sophomore now. Second, I have never spoken with Orange, not that he's a bad guy. However, I haven't seen mooney run a single play during camp due to him suffering from an injury. So many people who claim he's lazy probably haven't actually seen him play.

I have never seen Mooney, so anything people say about him can be true to me. (Misread above comment)

EagleSophomore that a kid! Hows the Sophomore class at ON looking this season? JV state champs?

not really sure, position groups have been kinda isolated during the summer. The lineman have been pretty good though.

EagleSophomore is it true that many Olathe North football players have hard-working parents?

To the balless guy who posts as anymous, go to another site and blog, no kids allowed!!!

Last year was a down year for North, another down year this year, I'll take it. State Champ runner up, not bad in a down year!!

SME, the only thing they are good at is swimming. So unless it rains 6-10 inches every play off game, they will disappear.

Talking to my inside sources, I heard Mooney may not start and is considering going to SM East. Supposedly last Tuesday he was talking to Chip Sherman at a camp??

Are you sure SME, I heard OE, but that he didn't want to play for the Mayor of Shawnee, was looking for a coach that could take the team deep into the playoffs???

I Googled Orange Mooney to try to find highlights and only found the one within this post. But then there's one of him singing a song by "Ne-Yo", who ever that is. Just saying, the kid may have a brighter future in singing as far as I can tell.

I heard that yesterday Orange Mooney was unmasked Scooby Doo style, only to reveal that it was old man Withers trying to scare the sunflower league into thinking O North had it's next simone award winning back. And he would have gotten away with it if it wasn't for those damn kids, and they're dog too.

Hey Eaglelover, Ive got this crazy idea that "Anonymous" is more than one person. In other news I just made some easy mac. Its delicious.

He Anonymous eating mac and cheese. Sounds like something a SME yell leader would do. I heard you were also getting involved in dance, I bet that KU dance camp was a ball breaker....enjoy that mac and cheese and good luck building your pyramid at homecoming....meooooowwwww. LOL

Everythings just speculation right now...we'll see who's still talkin at the end of the season

Anonymous and EagleLover should have dance off. Is it true that to go to olathe north you have to be black or mentally disabled? Or both?

no, because then you would be a star student

Why would he consider SME, they had a up year this year and a up year is losin in the first round of the playoffs??

just letting you know. SME is a completely different program than in years past... first of many up years. They are returning the most players/starters out of any playoff team of last year.

But it is still SME. They are going to have to prove they have the toughness to hang. One or two years does not do it. At the end of the day this is not a rich boys sport.

I would say that every NFL star could be considered a rich boy. They seem to be pretty good at the game

So if you're mentally disabled you're the star student at ONorth? Come on Eagle Sophomore...

I don't know why people think Olathe North is going to have a bad year. Everybody thought that they would not do good since they lost almost their whole roster from the previous year. Then they made it to state. So whoever says they will have an off year needs to shut it

When most people say that North will have a bad year, they are meaning that North will be in the state championship, just may not win it. A great year for SME is .500 and making the play offs. Let's keep everything relevant here. Most SME football players practice 3 days per week and do dance and diving the other 2 days.

ON is going to paint the town Orange!! As in Orange MOOOOOOOOOOOONEY!!!!!!

^^^ what makes you say that mooney is a cancer?

Thats not a good squat.....thats a pretty good bench but squat not so much

Alex Forslund is a baby back bitch. SMS blows at everything. They live in the slums of Johnson County. ON will be good. SME has no weekness other then a QB situation. Which doesnt matter bc even EagleSophmore could throw the ball to ELLIOT FAEBER!!!!

first of all alex i said BENCH not squat and you said you can almost do that that is sad for real so you rsaying his arms are stronger than your legs great comment what do you bench again like 185 right?

first of all alex i said BENCH not squat and you said you can almost do that that is sad for real so you rsaying his arms are stronger than your legs great comment what do you bench again like 185 right?


Amazing! This blog looks exactly like my old one! It's on a entirely different subject but it has pretty much the same page layout and design. Great choice of colors! aol login

Really nice and interesting post. I was looking for this kind of information and enjoyed reading this one. 122betbkk เว็บพนัน