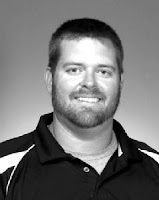 Lonergan entered the coaching field in 2002 as an assistant alongside Callaghan at Olathe North under the legendary Gene Wier.  In 2003 Callaghan accepted the head coaching position at SM West and Lonergan followed.

In his 10 years as an assistant Lonergan has been part of a combined 74 wins and only 23 losses, including two state championship appearances (2002 at Olathe North and 2006 at SM West).

Prior to his coaching career, Lonergan played football at Pittsburg State University.

Author's Note: I had the pleasure of playing under Coach Lonergan during my four years at SM West and, in my opinion, SM South landed one of the top assistant coaches in the Kansas City area.  It's surprising he hadn't been picked off earlier.

Lonergan was always a player-favorite and he brought a passion to the game that was unrivaled.  Plus, he coached under Gene Wier and Tim Callaghan, and it's hard to find two better coaches to learn from than those two.

How will Lonergan's game play and schemes vary from Callaghan's at SM West?  It's hard to say for sure, and we may not see the full extent of everything in year one, but Lonergan was known for adding "jive" to SM West's offense when he was in charge of play calling at the JV level.  Ultimately, he'll do a great job of getting the ball into the hands of his playmakers and letting them run wild.  And, given his pedigree, the Raiders will have an increased emphasis on running the football and playing tough defense.

Best of luck from a fellow PSU alum.

I hope he has luck, the SMS job looks like a career killer job to me. They haven't been good since Rodney Peete played QB there.

That has been some ugly Football to see since the end of the Merrill era. Potts is now an Associate Principal in the BV-SD, Don Hanna is now an assistant for BV under Driskell, and Claypool... same results as Hanna vs. fellow Sun Opponents. Good luck vs. the rest of the league!