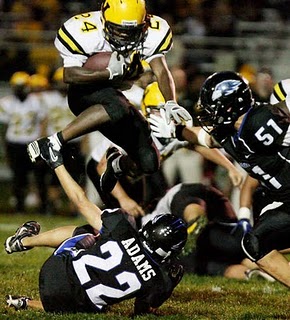 
Stat to Note
Burt's breakout game (seen on the right) came in a week four contest against Olathe Northwest when he rushed for 245 yards and two touchdowns on 32 carries.
Scouting Report
If Adam Lowe is known for his quickness, Burt is certainly noted for his shiftiness as a runner.  Using his smaller frame to his advantage, Burt was one of the more elusive running backs in the Sunflower League in 2010.

Burt didn't have a major impact for SM West until midway through last season, and even after that he still split carries with fellow running back Will Livingston.  Despite this, Burt rushed for 782 yards and seven touchdowns, which was good enough for Second Team All-Sunflower League honors.

SM West operates a run-heavy offense which means two things.  One, Burt will get as big of a workload as he can handle, and two, Burt's production line will be positively correlated to how well the Vikings do.  Last year Burt and Livingston combined to rush for 1,570 yards and 14 touchdowns, but neither back suited up for the Vikings in their Regional playoff game against SM Northwest, and the team lost.

Like always, alot will be riding on the focal running back in SM West's offense, and it remains to be seen how well Burt will hold up throughout an entire season as the primary ballcarrier.  What we do know is that he's one of the top returning backs in the league, and he has the potential to do big things for SM West in 2011.

Burt is a great shifty back but I am not sure he will be able to carry the workload of an entire season. He was easily injured in last years game against SM East and I dont know that he will be able to handle it this season. We have still yet to see what Mooney is able to do in the sunflower league but the top returning backs will be Adam Lowe and then Tre Burt

SME is going to kick ass

Agree, Callahan is the Marty Schottenheimer of high school football. Good regular season but disappear at playoff time. Jeff Meyers at East is the same way. Don't worry about these two teams down the stretch.