With a sound defeat of SM Northwest this past Friday, the Vikings gained a strong grip of Class 6A District-1, and a potential Co-League Championship with Olathe East. The Vikings are currently 5-0 in league play (the Sunflower Conference is based on the last seven league games for each team) and 1-0 in dictrict play. By winning the two remaining games, SM West can claim both titles.

News and Notes:
*SM West's next two opponents, SM North and SM East, have records of 3-4. During the Tim Callaghan era, SM West is 3-1 versus SM North, and 5-0 versus SM East.

*This Friday's opponent, SM North, is coming off a 19-3 loss to SM East. North is led by their quarterback, Arthur Rucker. The 6'1", 180 pound Rucker has passed for just over 700 yards on the season. North uses a balanced attack on offense and relies on low scoring affairs for success. Their defense has been significantly exposed once this season, a 45-0 loss at the hands of Olathe East.

*North head coach Ryan Majors is in his fourth year at the helm in Merriam. He has a career coaching record of 6-28 (.215), and happens to be a SM West alumn. 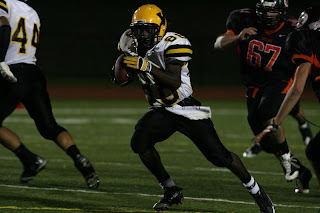