Believe it or not, the start of the 2009 football season is just a mere four months away. Its amazing how quick of a turnaround it is from one season to the next. On the news front, not a whole lot generally takes place in the springtime, and that has held true this year as well. Here is what I have:

**Chip Sherman (right) was formally introduced as the head coach at SM East. As stated previously, Sherman was the head coach at Platte County High School in Missouri for 18 years before taking a one year head coaching job at Salina South High School. Sherman cited family as his reason for wanting to return to the KC Metro area to coach once again. The last time Sherman made Sunflower League news was in December of 2005, when Sherman was rumored to have interviewed for the vacant SM Northwest head coaching position.
**Add Missouri and San Diego State to Olathe North senior-to-be Lucas Vincent's offer list. The 6-foot-3, 270 pound Vincent now has six Division One offers and counting.
**Also, fellow Olathe North senior-to-be linebacker Tre Walker (bottom left) made a verbal commitment to Kansas State in early April. Walker's commitment came as a surpise, as his recruitment hadn't been made public to that point in time. Walker is listed at 6-foot-4, 205 pounds and reportedly runs the forty in 4.6 seconds. 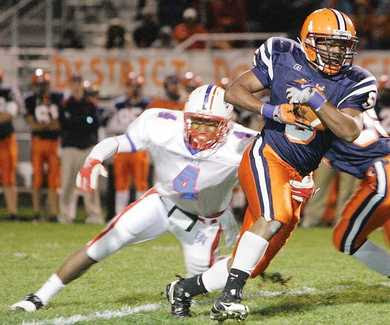