Name: DJ Balazs
School: SM West
Year: Senior
Position(s): Quarterback
Height: 5'10"
Weight: 170 lbs.
Notes: Balazs first got the nod to start at quarterback the second game of the 2007 season for the Vikings. Balazs, then just a sophomore, began his career 4-0 as a starter with key wins over rival SM East and league favorite Olathe South. However, the magic did not continue throughout the entire season for Balazs. Several key injuries, coupled with a brutal schedule to end the season saw SM West finish off the 2007 campaign with four straight losses. 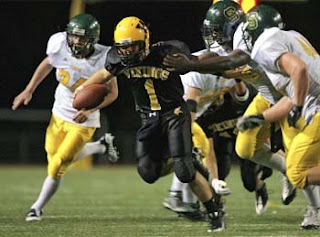 During that stretch Balazs left quite a bit to be desired as a quarterback, and he finished the 2007 season with a mere two touchdown passes--a number which ranked last in the Sunflower League at season's end.
Balazs clearly took the tough ending of the 2007 season as a learning experience. The DJ Balazs that started for SM West in 2008 was a completely different quarterback--for the better. The junior signal caller led SM West to a 9-0 regular season in 2008, including completing 58% of his passes for 961 yards. Balazs and the Vikings fell short in their first round playoff matchup, but not for lack of effort on Balazs part. In the game Balazs threw a touchdown pass, and also ran for one, accounting for the 14 points SM West put up in the game.
When the dust settled in 2008 Balazs proved to have been one of the most talented non-seniors in the league--his 1000+ yards passing earned him Second Team All-Sunflower League honors. If Balazs continues his development look for he and Camren Torneden of Lawrence Free State to compete for the top dog spot at the quarterback position in 2009.