Players to Watch in 2009: Keene Niemack

**For the upcoming weeks and months I will be compiling my list of the top players to watch for in the Sunflower League for the 2009 season. The list should be a good transition into the football season, and should help to provide a little more information on the top returning players in the league. The first player: Lawrence Free State senior Keene Niemack. 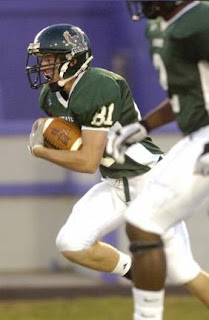 he Track and Field scene. A move to Lawrence in 2008 sent Niemack to Lawrence Free State, where he promptly made an impact for the football team.
Niemack saw the majority of his playing time on the defensive side of the ball in this past season, playing at linebacker and defensive back positions. Niemack's biggest game of the 2008 season came in the Sub-State matchup against Blue Valley, when he intercepted two Anthony Abenoja passes, one of which prevented a sure-fire Blue Valley touchdown. With one year under his belt, Niemack's transition to the size and speed of Class 6A football should be complete, and Niemack should make even bigger strides for the 2009 season.
Photo Courtesy John Henry, LJworld.com
Posted by Eli Underwood at 5:51 PM