In my pre-season power rankings post, I mentioned that although there are many teams that don't looked poised to have a successful season, the potential is always there--especially in the climate of high school football where anything can happen. Here is a look at some of the bigger turnarounds of the past decade in the Sunflower Conference.

From 1998 through 2001, the Hawks won only 15 games. The program was in need of a boost and the 2002 season provided that. Olathe East started the season a mediocre 2-2, before going on a hot streak and advancing to the state semi-finals against the two time defending state champs, Olathe North. The game was defense slugfest, but in the end a botched field goal kept Olathe East from winning. Olathe North won the 2002 state championship the following weekend.

Mark Littrell proved to be one of the best young coaches in the Sunflower League in his first four years, winning a combined 33 games in those four years. However, from 2002-2003, the Falcons were terrible going a combined 4-14. 2004 marked the emergence of several dominant Falcon players including Devin Cummings, Tony Bryant, Brady Croucher, and Bryce Morris. The Falcons were a completely different group in 2004, going 10-3, and advancing to the 6A state championship game.

The Viking program had reached a true down point in the early 2000s, having recorded four straight seasons with 3 wins of less up through 2003. In Tim Callahan's second year at the helm for the Vikings, the program experienced a rebirth, going 9-3 before losin 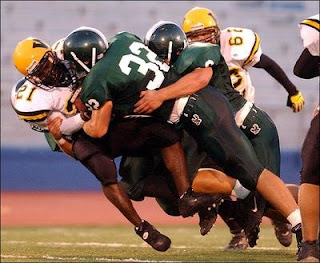 g to Olathe South in the state-semifinals. Viking senior DJ Barnett (right) was consistently beat up by opposing defenses in 2003, but he exploded for 1,900 yards rushing in 2004 and contributed greatly to the turnaround.

Lawrence battled mediocrity in the early and mid 2000s, rarely making a splash in the conference. In 2005, the Lions, led by a strong group of seniors including Brandon Lassiter and Nolan Kellerman had a huge turnaround and ended up compiling a 10-2 record. The Lions lost by one touchdown to Olathe East in the state-semifinals.

Lawrence Free State had always had talent, it was just a matter of putting it all together. In 2007 that came true for the Firebirds, resulting in arguably the top offense the Sunflower League has seen the past decade. The Firebirds featured future D1 players Ryan and Brian Murphy, and Christian Ballard, and it showed. Free State went 11-0 before meeting SM West in the state semifinals, where they lost 31-14. Two years later, the Firebirds finally cracked through and made the 6A state championship game.

SM Northwest 2007
2006 record: 4-5
2007 record: 9-2
The loss of big time receiver Chase Mejia to a transfer prior to the 2007 season could have been a major letdown for the Cougars, but it did just the opposite. The team, led by future D1 quarterback Alex Carder (right), started the season 7-0 before suffering a lo 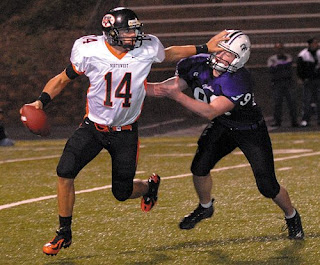 ss in their second district game. After that, SM Northwest won two straight games and advanced to the Sectional Round of the state playoffs.
Photos Courtesy LJWorld, and Flickr.
Posted by Eli Underwood at 6:12 PM

Maybe I'm wrong but it seems to me that in 2007 only the first 6 games counted towards the league title and that both SMW and SMNW were 5-1 at that point. Yes, West went on to lose the last three games but didn't they still technically share the league title that year also?