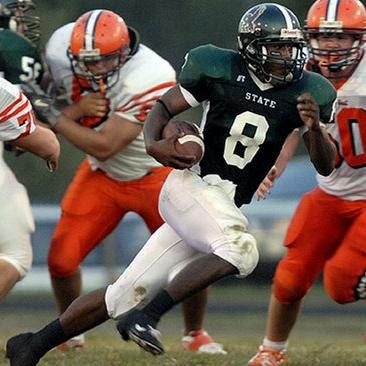 When you view his high school career as a whole, Ryan Murphy’s offensive numbers match up with anyone who played in the Sunflower League during the 2000s. Murphy’s ability to run the spread offense at Lawrence Free State will always be his claim to fame in most people’s eyes. However, Murphy also started three years at cornerback, one year longer than his two year stint at quarterback. His versatility lands him on the list at the athlete position.

Murphy started at cornerback as a sophomore in 2004 while also receiving reps on offense at various positions. He helped the Firebirds to the state playoffs, and recorded three interceptions on the season.

In 2005 Murphy moved to the quarterback position on offense, while still playing cornerback on defense. Lawrence Free State had installed a spread offense that summer, and Murphy was just the athlete to run it. Murphy led the Firebirds to their second consecutive playoff berth in 2005 on the heels of a 4-5 regular season. The Firebirds lost 40-18 to SM West in the Regional round of the playoffs, but Murphy’s offensive prowess in the conference was noticed. He finished the season with 1,655 passing yards, 626 yards rushing yards, which combined for 18 touchdowns. Murphy also recorded two interceptions on defense.

The flashes of brilliance the Lawrence Free State offense showed in 2005 came into fruition during the 2006 season. Murphy led one of the most explosive offenses the conference saw over the decade, helping the team to score over 60 points on three different occasions during the regular season. The Firebirds finished the regular season undefeated, then advanced through the playoffs to the Sub-State game to play SM West for a chance to play in the state championship.

The game was a battle for the ages in the first half, but SM West pulled away in the third quarter to win the game 31-14. Despite the outcome, Murphy played one of the better games of his career, passing for 210 yards and a touchdown, and rushing for 111 yards. Free State finished their season 11-1. When the dust cleared on the 2006 season, Murphy had passed for 1,863 yards, rushed for 1,084 yards, and scored 32 touchdowns. Defensively he recorded 22 tackles, three interceptions, and three fumble recoveries. For his efforts Murphy was named First Team All-State Class 6A and Kansas Top 11. Murphy accepted a scholarship offer to play at Kansas, and has been a regular in the Jayhawk's secondary the past two seasons.
Posted by Eli Underwood at 2:58 PM