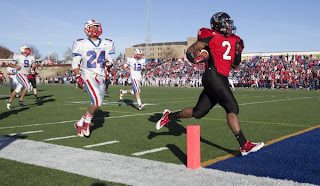 Wichita Heights 48, Olathe North 14
Olathe North's defense got an early preview of what they would be facing all day when Wichita Heights' Dreamius Smith (right) took the Falcons' opening play 58 yards for a touchdown. The run was called back because of an illegal block, but four plays later quarterback Matt Reed completed the drive with an 18-yard touchdown run. Wichita Heights added two more touchdowns in the first quarter on an 85-yard run from Smith and an 18-yard pass from Reed to Daniel DeShazer. Olathe North looked to have gotten back on track in the second quarter, but consecutive possessions failed to produce any points following Eagle drives into Falcon territory. Towards the end of the half Reed added another score for Wichita Heights from three yards out. The score gave Wichita Heights a 28-0 lead at the half.

Any hopes Olathe North had of making a miraculous comeback were squashed in the third quarter. Smith added touchdown runs of 30 and 10 yards for the Falcons, to help his team build a comfortable 42-0 lead. Olathe North's day was summed up pretty well when, trailing 35-0, Victor Simmons fumbled the ball a yard short of scoring a touchdown. The ball rolled out of bounds in the endzone and counted as a touchback, giving Wichita Heights the ball back. Olathe North's first score came late in the third on a 79-yard pass from Simmons to Adonis Saunders.

Wichita Heights would add one more score on a 60-yard run from Smith at the beginning of the fourth quarter. Fittingly, Olathe North's final score came on an 18-yard touchdown pass from Simmons to Saunders with minutes remaining in the game.

The loss marked just the second time in 10 state championship appearances that Olathe North has failed to come away with the title. The 34-point loss was the worst the Eagles had suffered since their 49-0 loss to Blue Valley on Nov. 11, 2005.

Hats off to Eli for the great work he did on this site throughout the year. Great effort! Keep it up and I will look forward to next season with you.