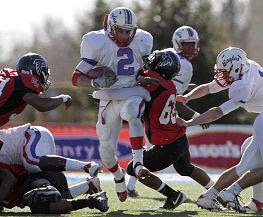 Team grades were assessed on a team-by-team basis. For this reason, total wins didn't necessarily necessitate a higher grade. I awarded three A's, three B's, five C's, and one D. In my opinion no team had a bad enough season to earn an F, but also, no team earned an A+ grade the way Olathe North did last season.

A
Olathe North (11-2): The Eagles (right) weren't as dominant this season as they were last year, but they claimed a share of the Sunflower League crown, advanced to the state championship game, and finished with at least 10 wins for the eighth time in since 2000.
SM East (8-2): This season could probably go down as the best in SM East history. Sure, they lost in the first round of the playoffs, but the team played at levels that hadn't been seen in program's history.
A-
Olathe East (10-2): It was business as usual for the Hawks. Olathe East recorded their eleventh straight winning season (the longest active streak in the SL) and made their third Sub-State appearance since 2000.
B+
Olathe South (7-4): After a rough 0-2 start the Falcons really got their act together, winning seven of their next nine games. Their upset of SM East in Regionals was a nice victory and the team played Olathe North much tougher in Sectionals than they had during the regular season.
B
Lawrence (3-6): There were alot of questions surrounding the LHS program after their tumultuous 1-8 season in 2009, but alot of those were answered with an optimistic 2010. The Chesty Lions showed more offensive diversity, and even pulled the upset of the year when they handed Olathe East its only loss of the regular season. The program looks to be headed in the right direction.
SM Northwest (6-5): The Cougars could have had a higher ranking had they not gotten off to such an awful start at 0-3 to begin the season. SM Northwest did benefit from playing in an easy district, but they took care of business and even upset SM West in Regionals. They were a few plays away from upsetting Olathe East in Sectionals as well.
C+
Lawrence Free State (5-5): The Firebirds seemed to have their usually crop of talent and speed but for some reason this year's group just didn't produce the same results on the field. The Firebirds never seemed to come away with wins in their biggest games this season. The 16-point lead they blew against Olathe East in Regionals epitomized the season well.
SM West (7-3): The Vikings had no trouble beating the teams they were supposed to beat, but their three biggest games all resulted in losses. Perhaps the most disheartening aspect of the season was that SM West should have broken a three-year old playoff drought when they faced SM Northwest in Regionals, but a few second half mistakes sent them home packing.
C
Leavenworth (1-8): I'll give the Pioneers an average grade for the season because, after all, we expect about one win a year from Leavenworth. The team showed a little fight late in the season when they beat Wyandotte and took SM North down to the wire, which was something we didn't see from the team last season.
C-
Olathe Northwest (3-6): Until the Ravens can start competing with the other Olathe schools they won't earn much respect. Coming off a solid 2009 campaign it seemed like Olathe Northwest had a solid foundation to build on in 2010. That didn't necessarily pan out as they failed to qualify for the playoffs.
SM North (2-8): SM North started the season 0-7 and at one point harbored a 14-game losing streak. The saving grace was the easiest 6A district in the state. The Indians' two wins came against teams that were a combined 3-15. SM North didn't do much to impress but their appearance in the playoffs keeps them above a D grade.
D
SM South (2-7): Despite graduating a strong senior class it looked like the Raiders were on track for an okay season--but those hopes quickly went down the drain. The worst part was that SM South really wasn't as bad as their record showed, they just were just never able to put it all together for four quarters.
Photo courtesy the Kansas City Star
Posted by Eli Underwood at 9:59 AM

Being an Eagles player I thank you, but to an earlier comment about "Big Play" shutting us down. I don't think so, we didn't need to pass, all we had to do was run. Our field position was always good because your kicker looked like he had his jock strap around his ankles. And then all we had to do was hand it off to Donis and get out of his way. 40yd drives....BABY!