SM West 17, Olathe East 14
For the second week in a row SM West was down two touchdowns early, and for the second straight week the Vikings fought back to win. Olathe East quarterback Carter McEntee found Chris Fields and Aaron Johnson for touchdown passes to build a 14-0 lead in the first quarter. However, that would be all the scoring the Hawks would come up with. SM West running back Cordi Pascal scored on a 15 yard run in the second quarter to bring the Vikings to within seven. After a field goal had closed the gap to three points, SM West quarterback DJ Balazs found Keifer Holliman for a 12 yard touchdown pass to put the Vikings up for good in the fourth quarter.


Olathe South 24, Olathe Northwest 17
This week Olathe South quarterback Tanner Dutton only passed the ball 30 times. He connected on 19 of those passes for 210 yards and two touchdowns. Despite a 17-0 lead at halftime, Olathe South had to do all in their power in the second half to prevent Olathe Northwest from coming back and winning the game. Olathe Northwest's Cullen Phillips scored on a four yard touchdown run with 9:51 remaining in the fourth quarter to get the score within seven points at 24-17, but the Ravens weren't able to get on the scoreboard again.


SM North 41, Leavenworth 0
For the first time in Ryan Majors time at the helm at SM North, the Indians are 2-0. An early 41 yard touchdown run by Arthur Rucker set the tone for the game, as SM North went on to score five more unanswered touchdowns.


Lawrence Free State 36, SM East 3 (Thursday Night Game)
On Thursday night the Firebirds of Lawrence Free State showed off the talent they possess in a thorough domination of SM East. Free State's Camren Torneden (below) carried the ball 16 times for 167 yards and two touchdowns, in addition to a 68 yard punt return for a touchdown. Free State running back Kirk Resseguie complimented Torneden with 19 carries for 72 yards and two touchdowns. Meanwhile, SM East was only able to put out 149 yards of total offense. 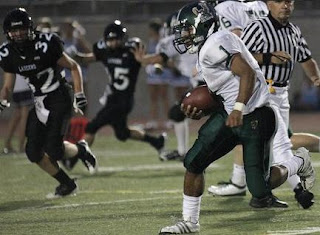 SM South 28, Lawrence 7 (Thursday Night Game)
The start to the 2009 season is not going well for Lawrence High. On Thursday night they were soundly defeated by the Raiders of SM South. Lawrence scored first, gaining a 7-0 advantage before SM South took control. The Raider's Grant Hilton scored 3 touchdowns, while fellow teammate Johann Swanepoel added 117 rushing yards on 19 carries. On the other side of the ball Lawrence's Tyrae Jenkins was only able to come away with 50 rushing yards on 15 carries.
Posted by Eli Underwood at 3:45 PM

Wow, clearly head and shoulders the #1 game in Kansas this week and Metro Sports not only doesn't tab it as the game of the week, they don't even show a score, a single highlight or even apparently send a camera crew for HS roundup to the SMW-OE game. I think Sunflower league fans need to start a boycott, I mean how can they not cover this game AT ALL? Well, their loss, it was a great game to watch.

I agree...the fact that the only Sunflower League game being broadcasted this season is SM South vs SM East this Thursday, is pretty dissapointing.