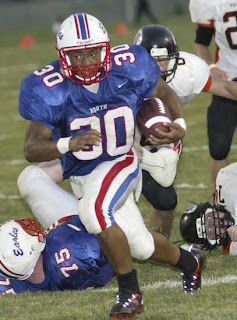 For the first time in years the SM North program is having an optimistic start to the season. After blanking Leavenworth 41-0 on Friday, the Indians pushed their record to 2-0, and they remain, along with Olathe North and SM West, as the only undefeated teams in the league. It's hard to say if the Indians can sustain the success, but nonetheless they have played well thus far.

The Eagles (right) are quite simply playing better football than anyone in the Sunflower League at this point in time. After dismantling SM Northwest by 29 points on Friday, it has become pretty obvious that Olathe North will be the team to beat in the Sunflower League, and probably class 6A for the remainder of the season.

The Vikings haven't been super impressive in either of their wins--but maybe that is the most impressive thing about their team so far this season. The fact that they have made two double touchdown comebacks the past two weeks illustrates that this team clearly has a solid core of leadership that presumably will not be likely to falter under pressure.

The season is not going well so far for LHS, sitting at 0-2 and coming off of a 21 point loss to SM South. Lawrence has notable talent in Tyrae Jenkins, Daren Sorem, and Jay Baker but after their last loss it's a wonder if the team will be able to get it all together by season's end.

The Pioneers followed up a 65 point loss in week one with a 41 point loss and goose egg in week two. At this point in time it doesn't appear that 2009 will be the year Leavenworth climbs its way out of the cellar.

The Cougar's big loss to Olathe North on Friday exposed some large areas of concern. Namely, the inability to produce offensively. The Cougars 135 yards of total offense was in no way impressive. But, then again, maybe the Olathe North defense is just that good?

**Lawrence Free State's Camren Torneden reminded us all Thursday of how much of a weapon he really is. Torneden rushed 16 times for 167 yards and two touchdowns, and also returned a punt 68 yards for a touchdown.

**SM Northwest's KC Waterman ran the ball 21 times for 112 yards and a touchdown against Olathe North's stout defensive front. In the Cougar's loss, Waterman accounted for 83% of his team's total offense.

**Olathe North's Tre Walker is making his D1 commitment to Kansas State look more legitimate every week. On Friday Walker recorded two first half sacks, before intercepting a pass and returning it 49 yards.

**In helping his team garner their first win of the season Olathe South's Tanner Dutton (below) completed 19 of 30 passes for 210 yards and a touchdown. He now has 525 yards passing and two touchdowns on the season. 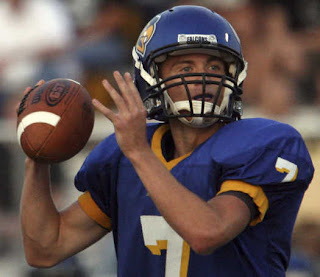 1. Olathe North (2-0): The Eagles are looking like the most dominant team the Sunflower League has seen in years.

2. SM West (2-0): The Vikings are yet to explode offensively, but have nonetheless been impressive.

4. Lawrence Free State (1-1): The Firebirds played to their potential in week two, and showed they are capable of dominating.

5. SM Northwest (1-1): Tough loss for the Cougars, but the good news is that they don't have to play Olathe North again--in the regular season that is.

7. SM North (2-0): The Indians are 2-0 and have reason to celebrate. To really impress though, they would need to take down Free State in week three.

8. Olathe Northwest (1-1): The Ravens nearly came back from a 17 point deficit to win on Friday. They are playing much more competitive football than in past seasons.

10. Lawrence (0-2): Many question marks are floating around the LHS program right now. The answer to all those question marks? Winning.