1. James Franklin, running back, Olathe North: Franklin sits atop the list for the second consecutive week after an outstanding performance against SM Northwest. In the game Franklin rushed for 156 yards and scored three touchdowns. Despite receiving limited touches because his team has blown out their two opponents, Franklin has still rushed for 288 yards and five touchdowns.

3. Camren Torneden, quarterback, Lawrence Free State: Torneden put up some pretty dirty numbers in week two--167 yards rushing for two touchdowns, and a 68 yard punt return for a touchdown. If last season is any indication, Torneden's numbers will only continue to improve. 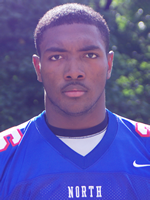 5. Lucas Vincent, defensive lineman, Olathe North: Vincent is the third Eagle on the list, and for good reason. He has been the anchor of a defensive unit that has only surrendered 18 points on the season, and in their last game held SM Northwest to 135 yards of total offense.