1. Olathe North
Any questions as to whether or not Olathe North was worthy of the hype they had received over the summer were answered in their 71-6 trouncing of Leavenworth. Granted, Leavenworth has been a perennial cellar-dweller in the Sunflower Conference, but dropping 71 points on any team is impressive. James Franklin and Tre Walker combined for five rushing touchdowns--the combo of those two is probably going to be a common thread throughout the season.

2. SM North
For the first time in head coach Ryan Majors five years at the helm, the Indians won the opening game of the season. A nice victory on the road at Lawrence should instill quite a bit of confidence in the group, and with Leavenworth on the schedule for Week Two, the Indians could be looking at their first 2-0 start in years.

3. Olathe East (below)
No Derahn Williams, Rick Settle, or Jake Woten? No problem. The Hawks made a big statement in Week One by taking down last season's 6A State-Runner Up in Lawrence Free State. It doesn't seem to matter who graduates from Olathe East, the program continues to reload. Now the true question is whether or not the Hawks can maintain the success throughout the season. 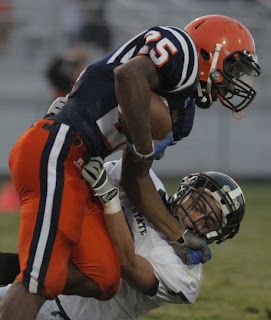 1. Lawrence Free State
Maybe the Firebirds are just slow starters. With the exception of the 2006 season, Lawrence Free State has never been a team that starts the season real hot. Regardless, the Firebird's loss to Olathe East on Friday was a flat out let down. Their five turnovers certainly didn't help, and it makes you wonder how much the loss of Chucky Hunter is going to hurt the team.

3. SM East
Obviously the Lancer's new head coach Chip Sherman has a proven track record and a great coach, and his influence on the program should take hold soon--but just not yet. The Lancers came out flat and were beat down by Olathe Northwest in a 29-7 loss.

**Olathe South quarterback Tanner Dutton passed for 315 yards and one touchdown against SM West, but despite the lofty number the Falcons lost, 29-23.

**Olathe North's Jason Peete returned an interception 35 yards for a touchdown, while also helping the Eagles to a defensive domination of Leavenworth. After a dominate junior season, Peete looks on track to being one of the Sunflower League's top defenders again in 2009.

**SM West's Alex Snook returned a late interception for a touchdown to put SM West up on Olathe South for good. Snook's efforts were the bright spot on an otherwise unimpressive effort from the Viking's defensive coverage on Friday.

**The combined effort of Josh Lemke and Brandon Bouvilom helped Olathe Northwest to a very impressive defeat of SM East. The Ravens showed off an intensity they had lacked in years past.

**Despite his team's loss, Lawrence running back Tyrae Jenkins (below) rushed for 171 yards and two touchdowns on just 16 carries. 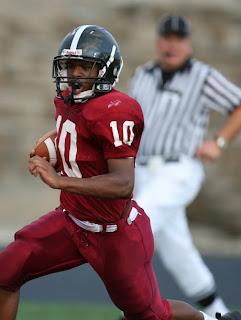 2. SM West (1-0): Vikings grit out a tough win with their typical dosage of hard nosed running and big plays defensively.

3. Olathe East (1-0): I've said it before--2009 could potentially be Jeff Meyers best body of coaching work ever. His inexperienced squad defeated a seasoned Lawrence Free State team in impressive fashion in Week One.

4. Lawrence Free State (0-1): We'll assume the Firebirds are off to another slow start.

5. SM Northwest (1-0): Although an eight point win against SM South isn't real impressive, the fact that they did it without two of their best athletes is.

6. Olathe South (0-1): It appears that head coach Jeff Gourley will be implementing alot of passing in 2009.

9. Lawrence (0-1): The Chesty Lions ran the ball 41 times Friday, and appeared hesitant to throw the football.

10. SM East (0-1): Chip Sherman is denied is 200th career win in a disappointing start to the season for the Lancers.

11. SM South (0-1): On a positive note, the Raiders were within eight points of beating SM Northwest.

12. Leavenworth (0-1): Not a good start to the season. The Pioneers may not buck their poor tradition anytime soon.

Posted by Eli Underwood at 5:58 PM