Olathe North 38, Lawrence Free State 20 (All Star Video Sports Highlights)
Olathe North all but sealed their first Sunflower League crown in five years with an outstanding victory Friday night in Lawrence. The Eagles came out with a plan to pound the ball and did just that. Olathe North ran the ball 60 times for 461 yards and didn't even complete a pass in the game in totalling their 38 points. Olathe North's James Franklin (below) rushed for 284 yards and four touchdowns on 31 carries. 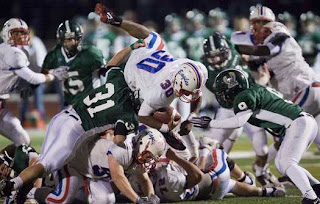 SM Northwest 27, Olathe Northwest 17
SM Northwest was able to capitalize on several Olathe Northwest turnovers in the first half, ultimately resulting in the 10 point margin of victory. SM Northwest was led by running back John Hauk's 158 rushing yards and touchdown. On one scoring drive, Hauk carried the ball eight consecutive times for 73 yards.
Olathe South 34, SM East 30
The Falcons from Olathe South played another up-and-down game, but came out on top after two consecutive fourth quarter touchdowns. Olathe South was trailing 30-20 with just over four minutes to play when Nick Sands took a Tanner Dutton pass 57 yards for a score. The Olathe South defense held SM East and the Falcons regained possession with 2:14 remaining. Dutton led the offense down the field and capped off the drive with a 10 yard touchdown pass to Marquis Addison. The score sealed the deal on the game, preventing SM East from winning their third straight game.
SM West 31, Lawrence 0
SM West put forth a bone-crushing defensive effort on their homecoming and not only shutout Lawrence, but also held the Chesty Lions to a mere 104 yards of total offense. SM West's Adam LeBlanc played a stellar game, scoring three touchdowns (two rushing and one receiving) and collecting an interception on defense. Lawrence now sits winless at 0-6.
SM South 20, SM North 17 (All Star Video Sports Highlights)
It took overtime to decided the outcome of this heated Shawnee Mission School District matchup. Trailing 14-7, SM North's Arthur Rucker completed an 80 yard touchdown pass to Ryan Finazzo to tie the game up at 14 all. SM North opened overtime with a 27 yard Ryan Goodburn field goal, but SM South's Johannes Swanepoel punched in a rushing touchdown to give SM South a 20-17 OT victory. Swanepoel ran the ball 29 times for 143 yards and the touchdown.
Olathe East 53, Leavenworth 3
Olathe East used a balanced attack to lay half-a-hundred on Leavenworth in the final game before district play. Olathe East's Carter McEntee completed 15 of 20 passes for 190 yards and three touchdowns. On the ground Austin Fulson led the Hawks with 154 rushing yards and two touchdowns on three carries.
Posted by Eli Underwood at 6:27 PM

TheImp was only 4-2 last week as SMS made a monkey out of me in overtime and Free State let me down but I’m still 16-2 for the season.

District 1: SMW and SMNW are heavy favorites in this district in that order, West looking for the 2 seed. As with a lot of these districts the most interesting game is in the first week:

SMNW-SMW This game was close last year ONLY because of a series of Viking miscues beginning with a KO return for a touchdown on the opening kick for 7 of the Cougar’s 10 points. This year’s Atagi-less installment of the Cougar team has been blown out by the league’s top teams and although the Vikes continue to struggle on offense in the first half, their smash mouth defense will be enough to win this game….SMW 28 SMNW 7

SME-SMN The Lancers have improved over the course of the season and the Indians have been unable to finish games. I like East in this one… SME 19 SMN 14

District 2: Probably the most interesting district. BVNW comes in with the best record but OE is on a roll…can SMS be a factor?

BVNW-OE Are the Huskies for real? We know the Hawks are. The winner of this one should be district champ. If it’s OE they will probably be the 4 seed. BVNW could be 2 or 3 if they can sweep districts…OE 31 BVNW 21

SMS-BVN SMS must win this game to have any chance of making the playoffs. Against BVN, they should roll…SMS 27 BVN 10

District 3: Last year’s most brutal district is very average this year. Clearly ON is the favorite to be district champ and #1 seed. Literally anyone could step up and claim the other playoff spot.

ON-BV Iin spite of being 1-5 the Tigers have been in every game they’ve played this year (except BVNW) and it’s been a VERY tough schedule. I like BV to claim the second playoff spot in this district but they’ll have to get it done in the last two games…ON 44 BV 21

OS-BVW The Jaguars have faded as the season has gone on but so have the Falcons. OS defense is VERY suspect but they should get the job done against BVW…OS 30 BVW 24

District 4: By far the weakest district in 6A with only 6 wins between the four teams. Free State should not be challenged in this one. ONW should be the favorite to get the other playoff spot.

ONW-LHS The hapless Lions played perhaps the most uninspired game in their history last week as they laid down against SMW. ONW has something to prove here in what is basically an elimination game…ONW 23 LHS 6